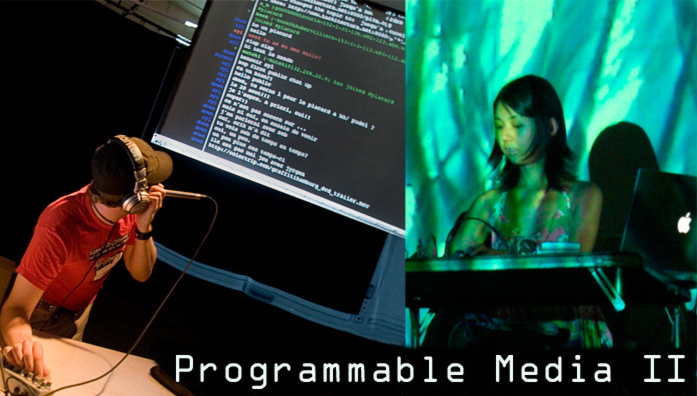 ['til death do us a part]
by tobias c. van veen 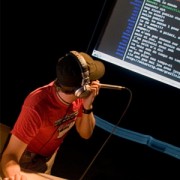 [’til death do us a part] was performed live by tobias c. van veen at Programmable Media II: Networked Music (Pace University, 163 William Street, NYC; and in Second Life).

[’til death do us a part]: Experiments in Electronic Voice Phenomena (EVP) utilized two reel-to-reel machines in an attempt after Konstantin Raudive & William Burroughs to establish contact with the dead. In the 21C electromagnetic tape is an anachronism. Dead media unwinds time from its spools. The dead are no longer human; and when the inhuman expire, do the inhuman become more human than human, at the moment of death? Two electromagnetic machines capture the unfolding of an era in which memory encodes the loving caress of electron imprinted tape. Two tape machines in tandem share their memories, silent at first but slowly amplified through continuous re-recording & simultaneous playback. Time out of joint falls in & out of tape sync; more inhuman than human loops the frequency.

“I wanted my human experience with machinic love to have the intensity of a hands-on relationship. Thus, van Veen turned to reel-to-reel (RTR) tape machines and Konstantin Raudive’s experiments with blank media in which he attempted to record the ‘voices of the dead’.

“This led to a series of investigations of the sonic realm arising between two networked R2R machines, a simple mixer and a DSP processor (to add spatialization and stereo channel manipulation to sometimes mono signals). These investigations revealed a performative realm, a space to improvise and to develop a capacity to ‘play’ the machines, or rather tweak & twiddle their hard knobs into spasms of ecstasy, cries of joy &, at times, moans of despair. The machines sang to me & each other, & I was drawn into the deadzone…”

The project is located here.