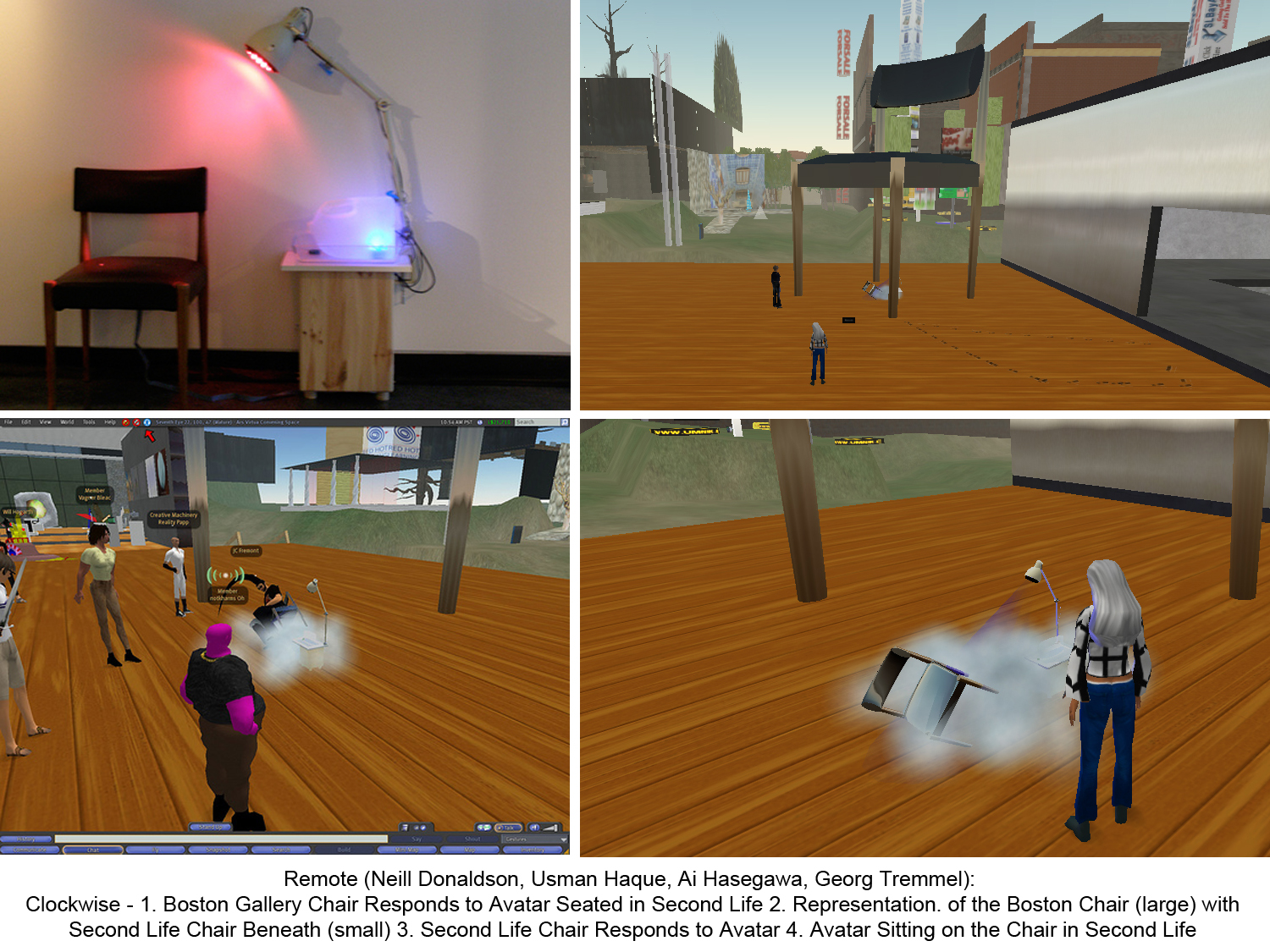 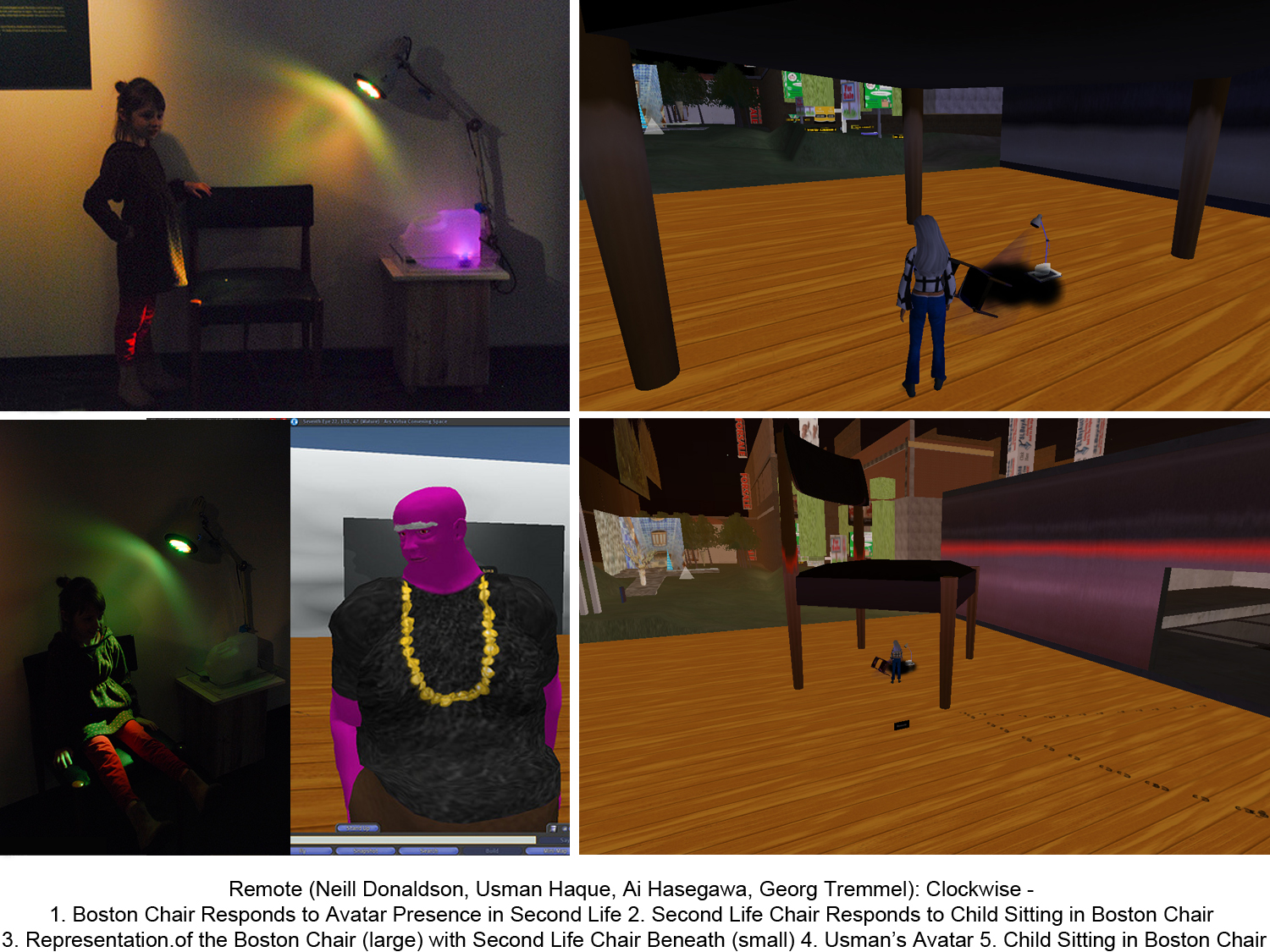 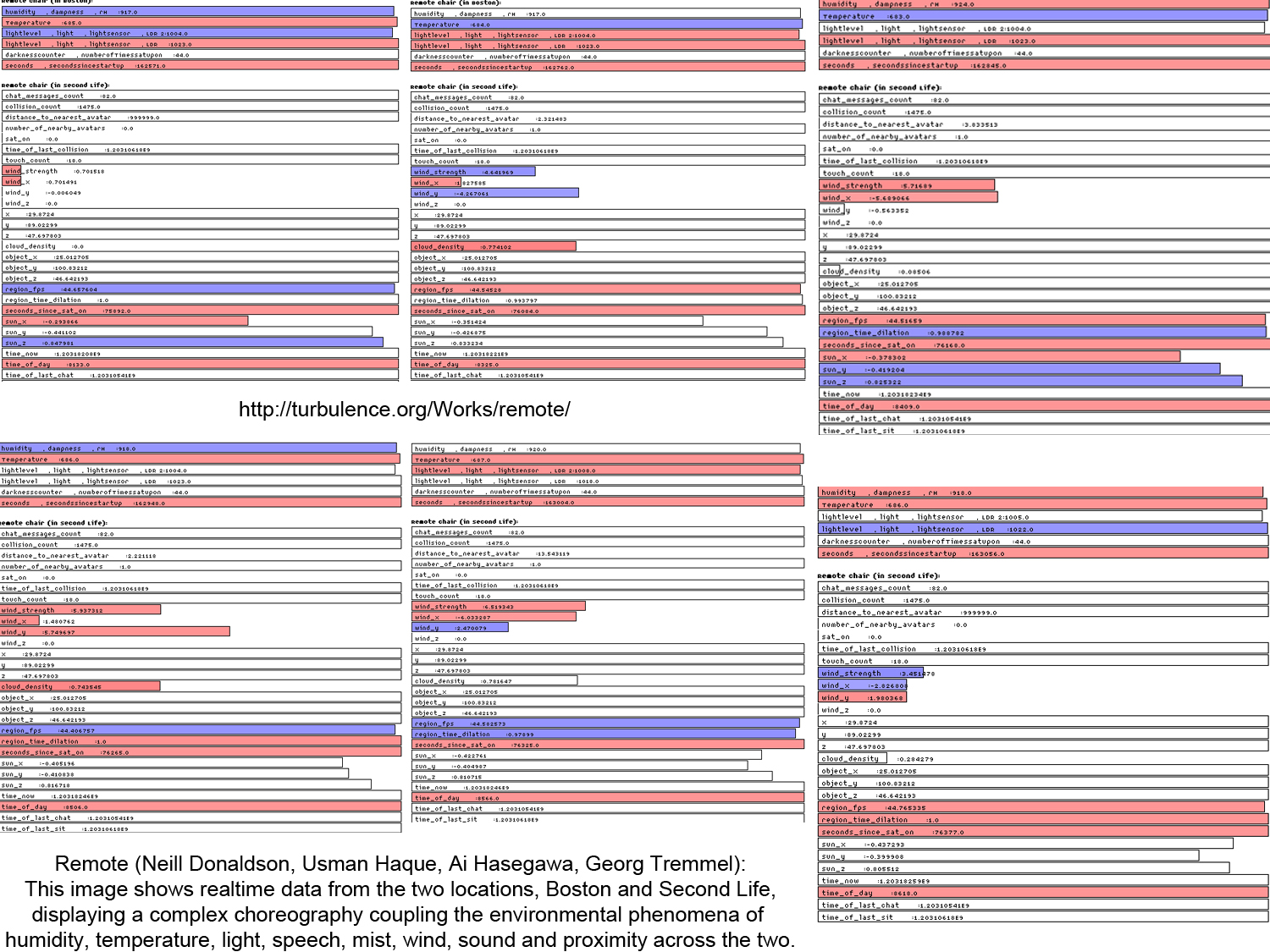 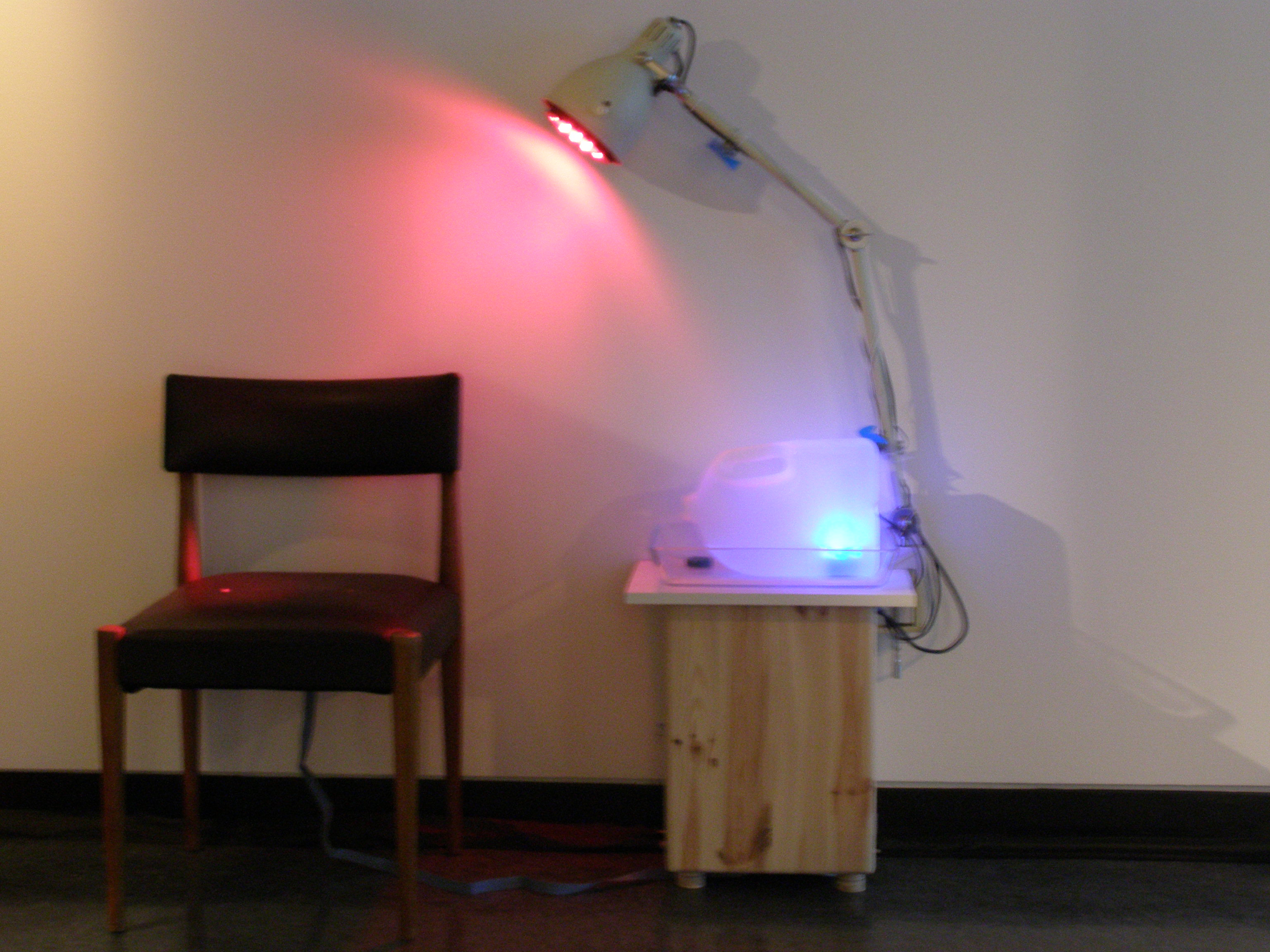 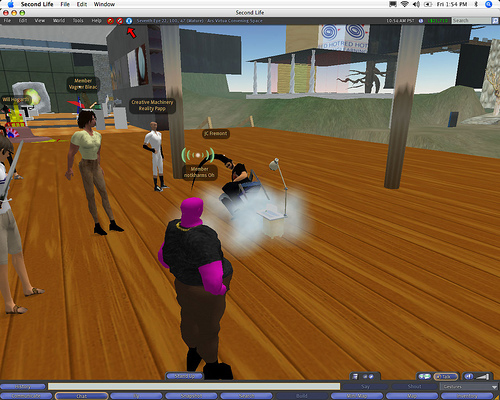 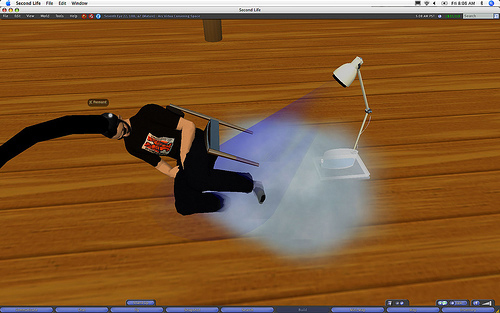 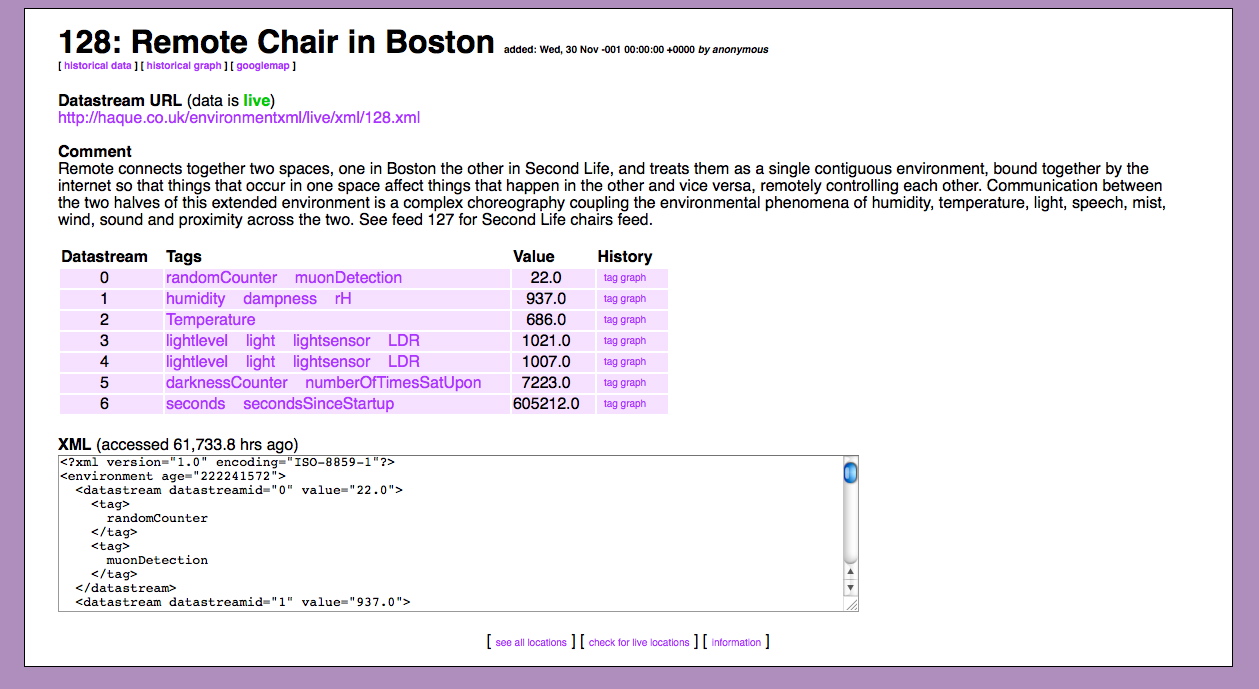 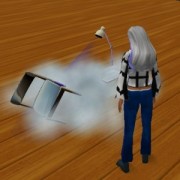 Remote connected the Huret & Spector Gallery (Boston) and Ars Virtua Gallery (Second Life), treating the two spaces as a single contiguous environment bound by the Internet (Turbulence.org). The Boston installation consisted of a chair, table, lamp, and dish of water outfitted with sensors and actuators. An identical installation was built in the online, three-dimensional synthetic world, Second Life (SL). Communication between the two installations was a complex choreography coupling the environmental phenomena of humidity, temperature, light, speech, mist, wind, sound and proximity across the two.

These phenomena responded to the presence of physical bodies (Boston), and avatars (SL). For instance, as humidity around the chair in Boston increased, the amount of mist around the SL chair increased; the more people sat on the Boston chair, the taller the SL chair became. Alternately, as the number of avatars near the chair in SL increased, the Boston lamp got brighter and brighter, etc. The idea was that each system responded in real time to the presence of people, so that people in Boston could “feel” the presence of avatars in Second Life, and vice versa.

Remote | One in Three Chairs | Compiled by Jo-Anne Green

Remote connected together two spaces, one in Boston the other in Second Life, and treated them as a single contiguous environment, bound together by the Internet so that things that occurred in one space affected things that happened in the other and vice versa — remotely controlling each other.

Communication between the two halves of this extended environment was a complex choreography coupling the environmental phenomena of humidity, temperature, light, speech, mist, wind, sound and proximity across the two. The object in Boston appeared to be a seat; but, experientially, the Second Life space appears to be inside the seat. A similar alteration of scale occurred in the other direction.

Visitors to the Boston space and the Second Life space had to negotiate to achieve goals: e.g. by sitting down, breathing, touching, knocking, colliding. The environmental data of both spaces was publicly available in realtime via the EnvironmentXML repository,  enabling others to build devices and spaces that connected directly to both Boston and Second Life.

The intention was to explore an architecture that was resolutely “human” (in the sense of being inhabited, configured and determined by its occupants) yet context-free (because it does not privilege geographical location).

The piece was inspired by Joseph Kosuth’s One in Three Chairs. Haque wrote: