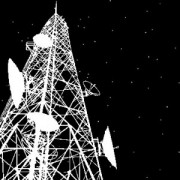 Radio Stare was an ambient entertainment device based upon synchronous delivery of motion imagery, musical sounds, and live radio. It consisted of two asynchronously looping streams — a long MIDI music loop and an even longer Flash web animation — coming together in constantly changing interaction with a live web stream of police radio transmissions from various cities. This “live” scanner feed was subject to all the vagaries of internet service and not within anyone’s control. Thus, Radio Stare was not a fixed system; any component could change at any time.

Radio Stare depended on the emerging ability of web browsers to receive and play new new media types simultaneously: Shockawave, Crescendo, RealAudio, and Audionet (when the piece was created this had all just become possible, even at the slow modem speeds of the day). Unfortunately subsequent generations of various audio players often handled only the one media type they were intended to play and ‘locked out’ others. In addition, many of the police and fire department scanner feeds that sprang up when live audio streaming was a novelty came and went at the whim of their providers.

Radio Stare was archived in 2000 when it became impossible to guarantee that it would work as originally intended.

“Radio Stare by John Neilson, a 1997 work, provides almost no opportunities for the user whose finger twitches eagerly to move on. “Leave the driving to us” the work announces. And as a passenger in Neilson’s vehicle, you watch the night highway unfold before you, at its own pace, at Neilson’s pace, slowly. He is in control. There is music, Neilson’s music, and perhaps most interesting for its time, a connection to the real world through its use of the scanner radio. Radio Stare is a critique of how the medium is used.” – Helen Thorington, Interview for MobileGaze, 2001