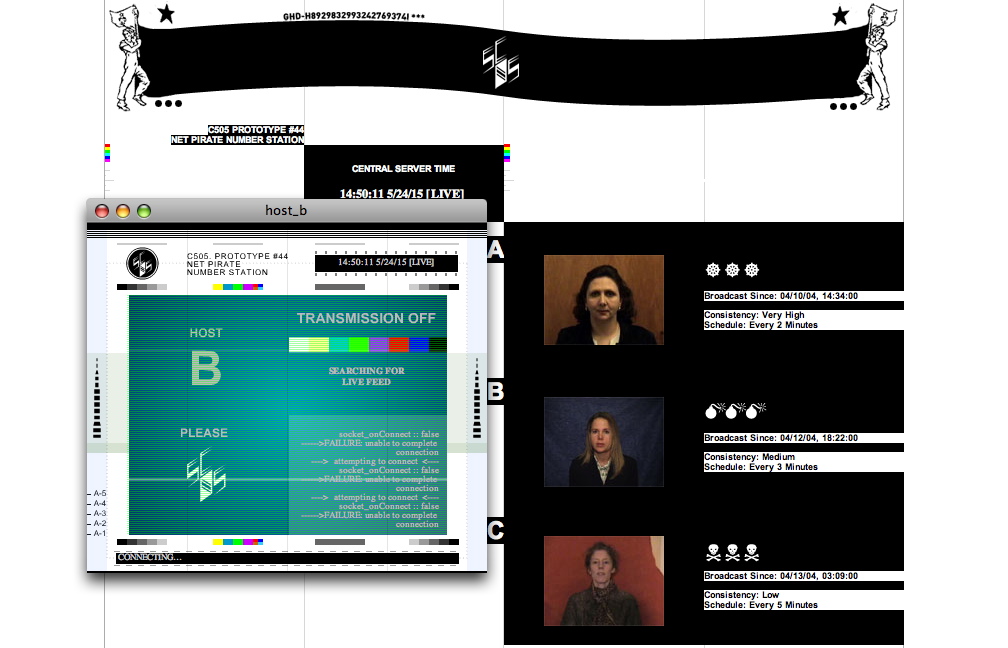 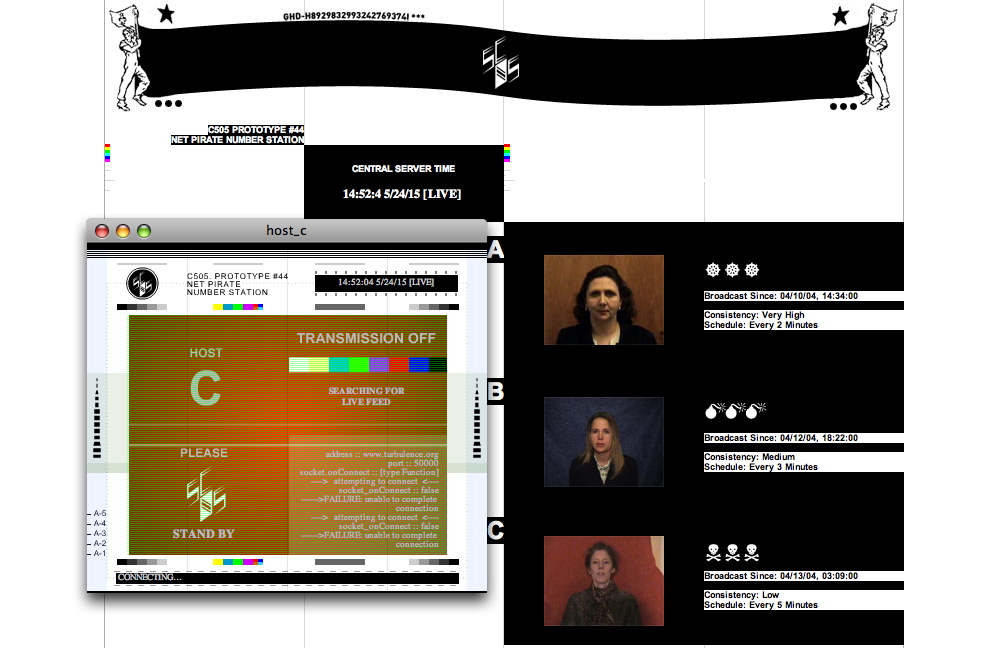 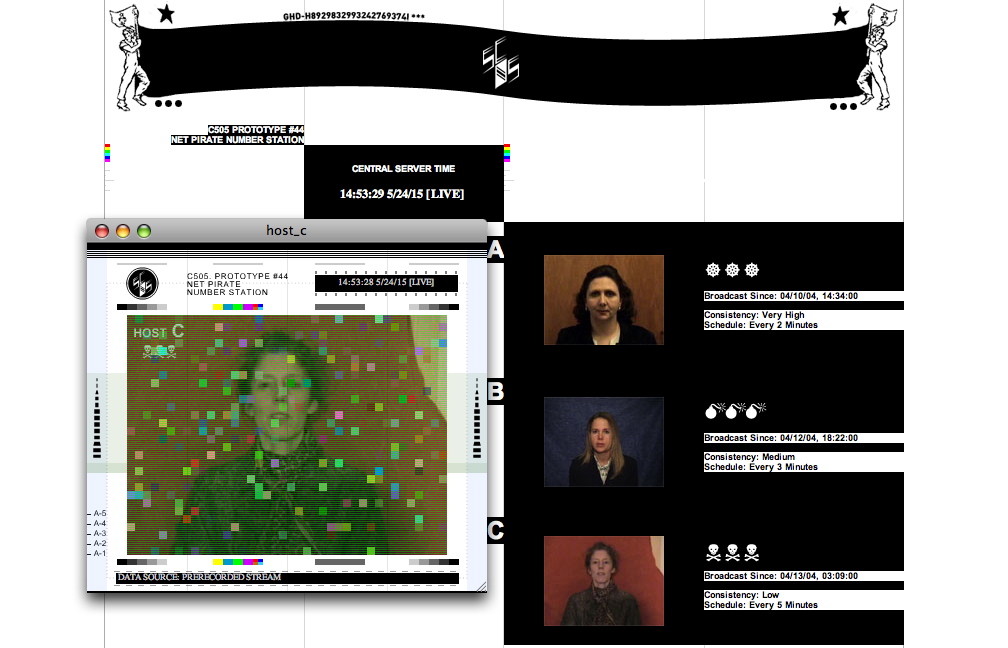 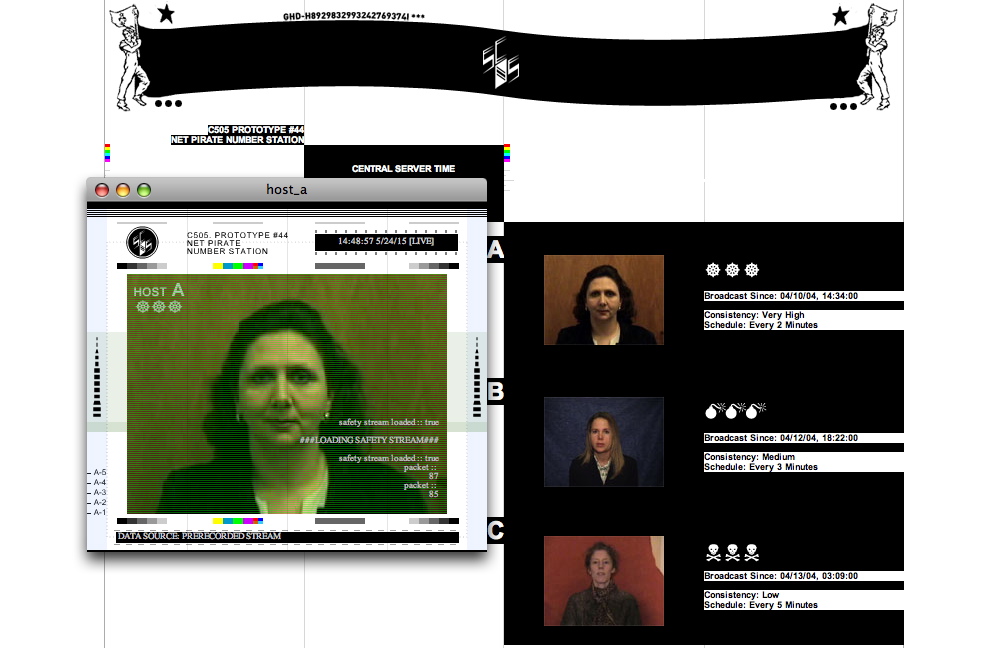 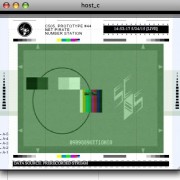 Prototype #44, Net Pirate Number Station is essentially a short-wave radio “number” station broadcasting over the internet. Enter and you will hear random web-generated number sequences read aloud by prerecorded video host personalities. Calming and trancelike — in a droning and perhaps vaguely threatening way — Prototype #44 was inspired by the many “Spy Numbers Stations” that sprang up in intelligence communities around the globe during the 1960s. These stations still exist in the shadowcultures of the world today – in Europe, South America, Asia, Africa and the Middle East – everywhere.

“We are proud to take our place in this community, amorphous as it may be.”

Interactivity has been kept to a minimum. Users are encouraged to enjoy themselves.

Surveillance culture isn’t a new thing really. Remember the Cold War – nuclear proliferation, international espionage, all that? Well now you can experience all those feelings of alienation and paranoia but with a new media twist. Brought to you by Turbulence.org, founding member of New York based C505 Yoshi Sodeoka’s Prototype #44, Net Pirate Number Station takes you back to the Cold War era when shortwave radio anticipated the internet’s capacity for anonymous, surreptitious worldwide communication. The ‘numbers stations,’ it is believed, were used by military powers to broadcast coded number sequences to spies in the field. Delivered in a repetitive monotone, usually by a female voice, the eerie transmissions developed a cult following and infiltrated the arts through jazz and electronic music. Sodeoka’s project uses the numbers stations as a model for a tongue-in-cheek, James Bond Meets Kazaa critique of new art culture itself, in which text “pirated” from websites is converted into numbers and delivered to visitors by three prerecorded video host personalities. Cold, detached, and just boring enough to be interesting, this station might be the new big thing.” – Peggy MacKinnon, Net Art News, Rhizome.org

Net Pirate Number Station, numerical-verbal abstraction.The encoding of information, besides masking its meaning, determines a structural transformation which has his own aesthetic,easy to perceive when it’s translated in audio form. This was noticeable in Free Radio Linux, an audio stream of the source of the Linux kernel read by a computer, a project reminiscent of the ‘code stations’ popular in the Eighties, pirate radios which broadcasted software. Net Pirate Number Station, instead, is connected to the historic techniques of transmission of enciphered messages using numerical codes. It’s the latest work by Yoshi Sodeoka commissioned by Turbulence.org. Using a television interface, particularly dear to the author, there are three possible views of the numbers generated from web pages. The numbers are then read aloud by concatenating prerecorded sequences spoken by many different women, and the numbers lose their identity in an endless repetition and become sound, a mantra of digits, interrupted by faint white noises. It’s a rhythm which flows uninterruptibly, drawing a shifty and obscure perspective which reveals a non-conventional approach to the use of data and to their organization and enjoyment. – Neural, June 22, 2004

Prototype #44, Net Pirate Number Station is essentially a transmitter of random web-based numbers. It works simply. We access major corporate news websites, parse text data from them, convert the data into numbers, filter the numbers and then transmit them to you using a prerecorded video host personality.

We pick our news websites at random, more or less. Meaning that after parsing a specific webpage for numbers and transmitting those numbers to you, our program chooses a random word in the webpage to seed a search engine query and a new webpage is located and the cycle starts over again. It will go on and on indefinitely because there are, in theory, endless webpages, more every minute, and our hosts are prerecorded, and thus always ready. So you may enjoy our station forever, if you like.

Like the shortwave number stations that emerged in the former Soviet Union and continue to exist in shadowcultures around the globe, our station will not offer a definitive explanation for its transmissions. Why do we parse the major corporate websites to find our data? Why do we believe that this will be entertaining to you? Why do we hope to offer a mystical experience? These are questions that you will have to answer for yourself. Are we too obsessed with the media? Are there already enough websites offering number-related content? Are we wrong about the nature of a mystical experience? These are more questions that you will have to answer by yourself.

Ultimately, we can only say that we hope you, the user, will look for meaning where there may not seem to be meaning. Like the medieval man before you, who saw a book but once in his life — as a child — and could not read it, but carried in his mind the image of that book through all his days and nights and died happily thinking of that book, we believe that that there is great value and the possibility of undreamed of happiness in things we cannot fully understand.

To put this another way, we believe, in effect, that we are not wrong about the nature of a mystical experience. The things that we first find quizzical and perplexing may ultimately guide us on the path to wisdom. And if we ourselves do not understand every first thing that we see or hear, but rather trancelike are guided through our lives and perhaps into our children’s lives, is this so wrong? Might we not be well served simply to look at the words in the book we cannot understand and wait for successive generations to decode them for us?

Or, in the case of numbers generated randomly, might we not happily wait for the same thing? Might we not let go of our need to understand and begin instead to appreciate the hypnotic sound of the prerecorded host voices and the beauty in scrambled sequences? Who among us would argue that there is not an almost overwhelming amount of data on the internet and that the daunting task presented to anyone trying to find meaning in it is a hopeless task?

Please, let go of yourself here. For a moment or an hour or a lifetime. Alone or with friends. Let go.