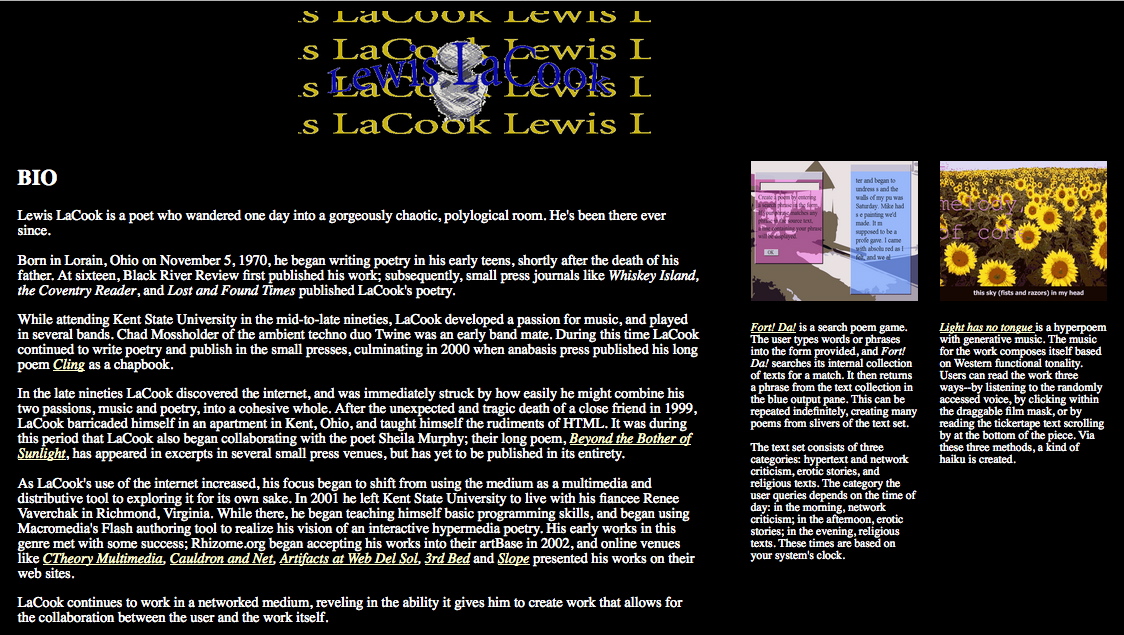 I’ve found over the years that, when it comes to exploring a networked medium, there are two ideas that fascinate me, and that are inherent in the mechanism of internet art.

The first is the aleatoric process, or chance operations. Every piece of net art I create is based at least somewhat on this principle. The idea of a “stable” artwork in a networked environment, an artwork that never changes, that looks and behaves exactly the same for every user that encounters it, interests me not in the least. No matter how beautiful or brilliant such a work is, it’s not taking advantage of its own materiality or environment, and can just as easily appear in another format, such as a book, a gallery space, or a cinema screen. The computer works via variables and loops, and variables, well, VARY.

My obsession with this concept takes the form of using the machine’s native ability to generate pseudo-random numbers, and to make decisions based on those numbers. Thus, when I create a networked piece, it neither looks the same for every user nor reads the same for every user. While some elements in any given work of mine do remain stable, some elements will always vary. Sometimes the text itself is generated this way (there are SEVERAL methods for accomplishing this), sometimes the music, and sometimes the graphic elements. While these chance elements are limited by the number of parameters I set for variance (in any given work, there are a finite set of possible ways the piece will vary; creating an infinite variability is unfortunately impossible), I do believe it’s a step in the right direction.

The second concept, related somewhat to the first, is the idea of a user collaborating with a work, as opposed to passively viewing it. A user’s collaboration may take the form of simply opening the piece (whereby some of the afore-mentioned aleatoric processes may become a factor), or by having a direct hand in the work’s manifestation. To me, this is the very essence of a NETWORKED work of art: that it participate, in an active way, with the network of people viewing the work. This is also what, for me, distinguishes net art from more traditional media.