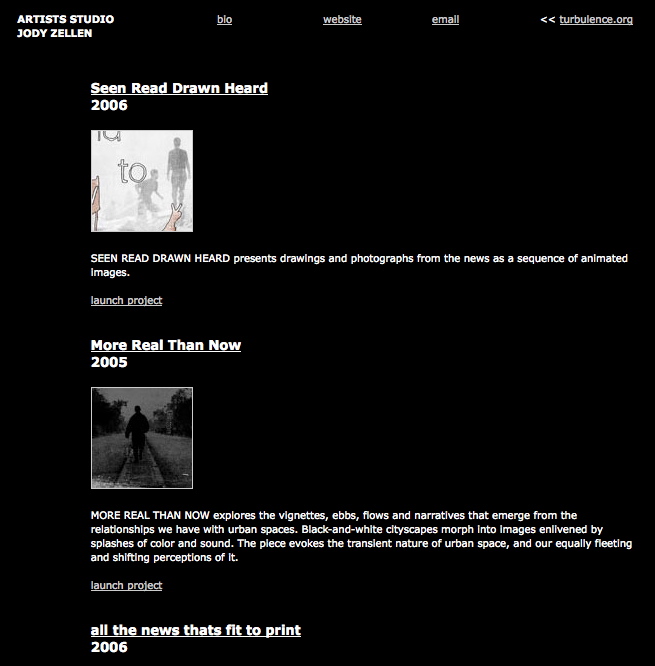 Zellen’s explorations of the urban environment include both architectural and digital spaces. Her projects are site specific and result in the ‘unexpected’. Zellen uses images from historical archives and newspapers to explore the relationship between the recorded, observed, and imagined city. For Instance: The social universe created by the recent emergence of truly pervasive mobile telephony allows us to explore the new translocal of connected – but disembodied – voices, captured well by the catch- phrase and marketing slogan, “Can You Hear Me Now?”

The recent transformation of our world into a multigenerational, international, always-on, and always within reach network of mobile phone users has liberated the individual from his or her physical environment. The conversation can take place anywhere – in the boardroom or from the summit of a distant alpine peak. Mobile telephone technology has allowed us to converse with each other where ever we go – even, as we all experienced last September, from aboard a doomed jetliner commandeered by terrorists. There is nowhere left from where we can not chat, debate, observe the world, and – given the two-way nature of the medium of mobile telephony – change the world, influencing the flow of history with the new omnipresence of conversation, and hence, information. Indeed, on September 11th, mobile telephones became a profound symbol of the translocal, inspiring heroic action based on knowledge gleened from a mobile phone call to the ground, where perspective and connection could come together in a way never before seen.

The dialogue of mobile telephony has transformed the nature of public space. We now have private conversations in public – and in so doing, these conversations, or at least half of them, become public events, a half-dialogue that no longer knows such a thing as privacy.

Engaged in millions of private dialogues, we make less eye contact, talk less to each other in our own community. The network transports us, and our attention, to far away places – while bringing half of our conversations back to our neighbors, leaving them guessing what the other half said.

Using the cell phone as a metaphor, this project will connect users and will investigate this changing nature of public space into a wirelessly connected translocal, where each person is a node in the network. Cell phone users – increasingly oblivious to their surroundings – remain undaunted by the fact that to anyone nearby, they appear to be carrying on animated monologues, stopping, gesturing and often yelling into empty space, behaving similarly to the street person who they surely would go out of their way to avoid.

With the introduction of new technologies into the urban environment the lines between the sane and the insane seem to be becoming blurred, as we all begin to participate in conversations with invisible friends that no one can see or hear – adding to the chaos, confusion, and intricacy of life in the city. Mobile telephony is changing the concept of personal space as it becomes part of the wider, translocalized network of callers.