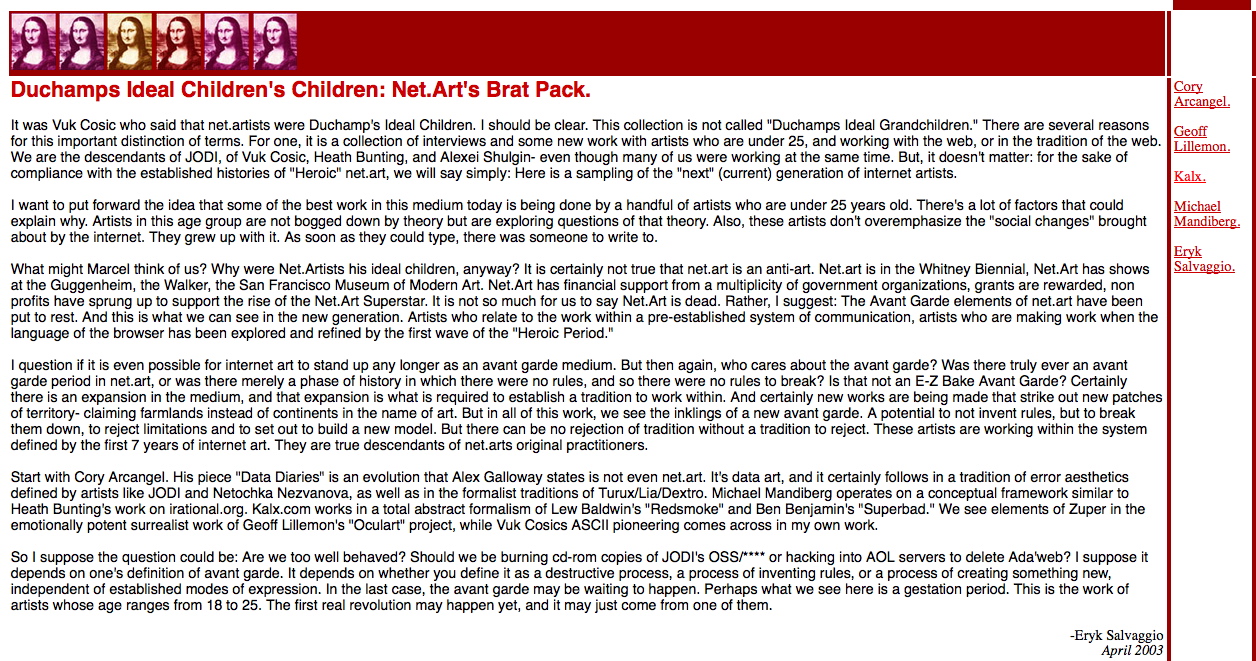 Eryk Salvaggio presents the works of four net.artists under the age of 25 as well as the interviews he conducted with each of them.

The genealogy connecting Net.Artists to Duchamp, as claimed by Vuc Cosic, may be inflated to some, but the originator of the readymade makes a versatile springboard for many art discussions. Duchamp’s Ideal Children’s Children: Net Art’s Brat Pack is a curatorial project of artist Eryk Salvaggio that re-presents the works of four other artists all under the age of 25. Interviews conducted with the artists – Cory Arcangel, Geoff Lillemon, Kalx and Michael Mandiberg – provide opportunities to read about the various influences and histories that inform their work. And as one would expect from descendants of Duchamp, they neither refute nor confirm any family ties.

It was Vuk Cosic who said that net.artists were Duchamp’s Ideal Children. I should be clear. This collection is not called “Duchamps Ideal Grandchildren.” There are several reasons for this important distinction of terms. For one, it is a collection of interviews and some new work with artists who are under 25, and working with the web, or in the tradition of the web. We are the descendants of JODI, of Vuk Cosic, Heath Bunting, and Alexei Shulgin- even though many of us were working at the same time. But, it doesn’t matter: for the sake of compliance with the established histories of “Heroic” net.art, we will say simply: Here is a sampling of the “next” (current) generation of internet artists.

I want to put forward the idea that some of the best work in this medium today is being done by a handful of artists who are under 25 years old. There’s a lot of factors that could explain why. Artists in this age group are not bogged down by theory but are exploring questions of that theory. Also, these artists don’t overemphasize the “social changes” brought about by the internet. They grew up with it. As soon as they could type, there was someone to write to.

What might Marcel think of us? Why were Net.Artists his ideal children, anyway? It is certainly not true that net.art is an anti-art. Net.art is in the Whitney Biennial, Net.Art has shows at the Guggenheim, the Walker, the San Francisco Museum of Modern Art. Net.Art has financial support from a multiplicity of government organizations, grants are rewarded, non profits have sprung up to support the rise of the Net.Art Superstar. It is not so much for us to say Net.Art is dead. Rather, I suggest: The Avant Garde elements of net.art have been put to rest. And this is what we can see in the new generation. Artists who relate to the work within a pre-established system of communication, artists who are making work when the language of the browser has been explored and refined by the first wave of the “Heroic Period.”

I question if it is even possible for internet art to stand up any longer as an avant garde medium. But then again, who cares about the avant garde? Was there truly ever an avant garde period in net.art, or was there merely a phase of history in which there were no rules, and so there were no rules to break? Is that not an E-Z Bake Avant Garde? Certainly there is an expansion in the medium, and that expansion is what is required to establish a tradition to work within. And certainly new works are being made that strike out new patches of territory- claiming farmlands instead of continents in the name of art. But in all of this work, we see the inklings of a new avant garde. A potential to not invent rules, but to break them down, to reject limitations and to set out to build a new model. But there can be no rejection of tradition without a tradition to reject. These artists are working within the system defined by the first 7 years of internet art. They are true descendants of net.arts original practitioners.

Start with Cory Arcangel. His piece “Data Diaries” is an evolution that Alex Galloway states is not even net.art. It’s data art, and it certainly follows in a tradition of error aesthetics defined by artists like JODI and Netochka Nezvanova, as well as in the formalist traditions of Turux/Lia/Dextro. Michael Mandiberg operates on a conceptual framework similar to Heath Bunting’s work on irational.org. Kalx.com works in a total abstract formalism of Lew Baldwin’s “Redsmoke” and Ben Benjamin’s “Superbad.” We see elements of Zuper in the emotionally potent surrealist work of Geoff Lillemon’s “Oculart” project, while Vuk Cosics ASCII pioneering comes across in my own work.

So I suppose the question could be: Are we too well behaved? Should we be burning cd-rom copies of JODI’s OSS/**** or hacking into AOL servers to delete Ada’web? I suppose it depends on one’s definition of avant garde. It depends on whether you define it as a destructive process, a process of inventing rules, or a process of creating something new, independent of established modes of expression. In the last case, the avant garde may be waiting to happen. Perhaps what we see here is a gestation period. This is the work of artists whose age ranges from 18 to 25. The first real revolution may happen yet, and it may just come from one of them.