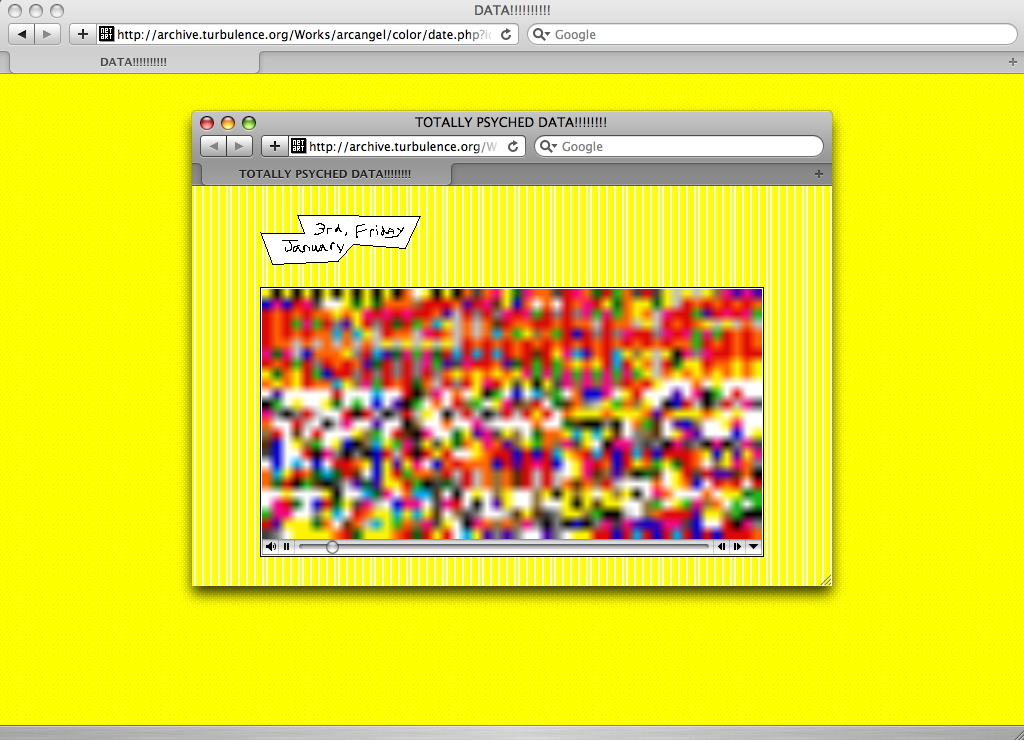 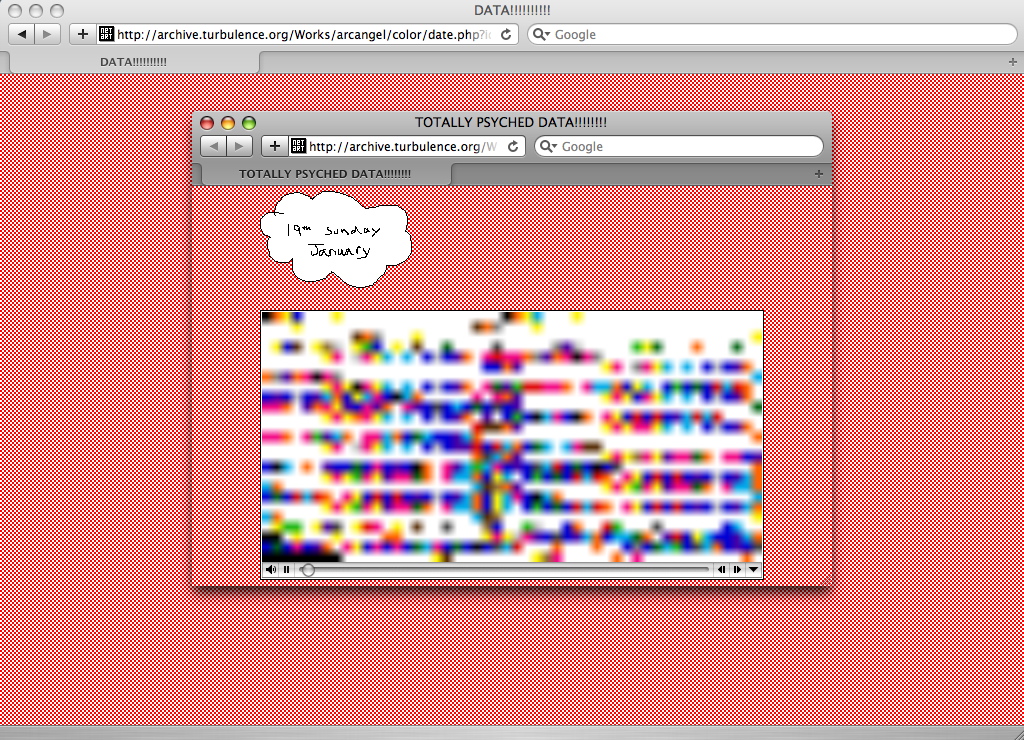 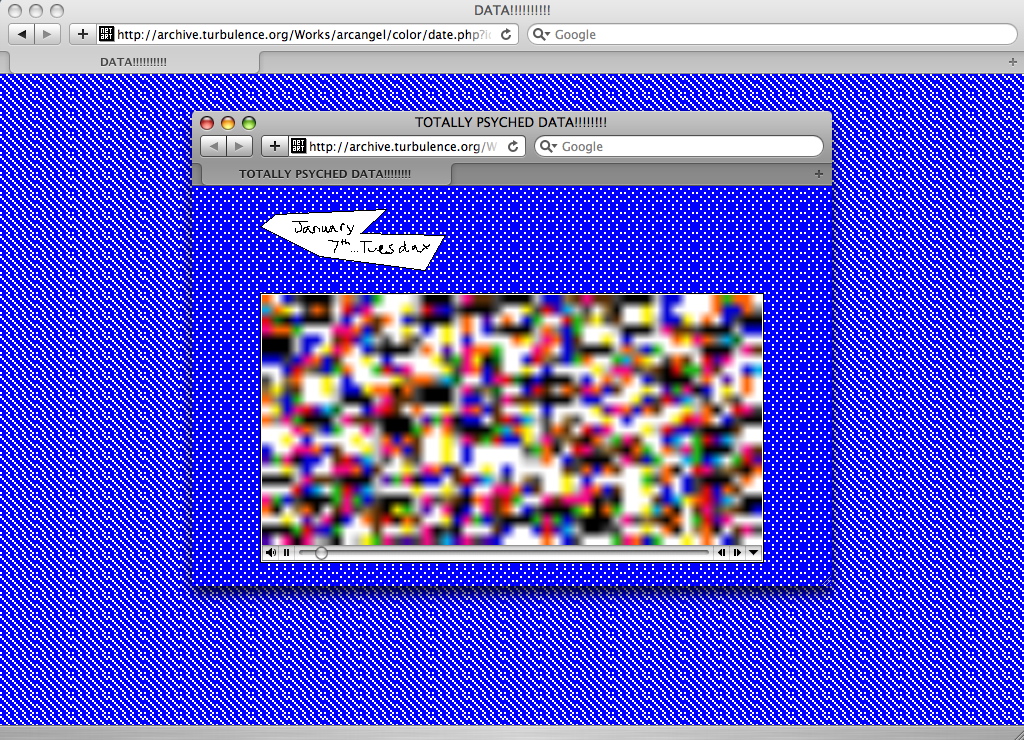 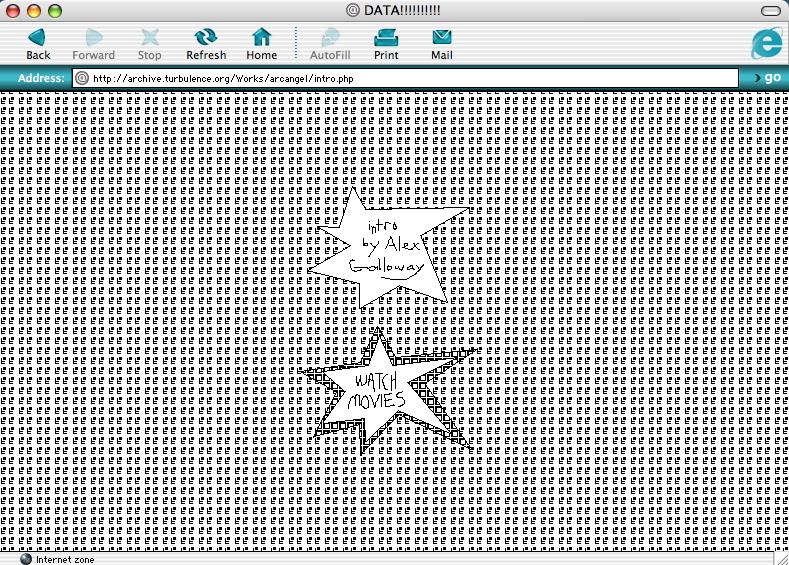 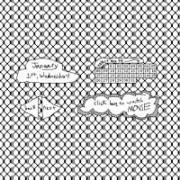 Data Diaries is 11 hours of video footage which was generated by tricking Quicktime into thinking the RAM of a home computer is video. This was done once for each day in January 2003. Watch as Cory’s emails, letters, webpages, DSL data, songs, and anything else he worked on that day float by as a totally-psyched attention deficit disorder 15 frames per second video experience.

[Read #DigitalArchivesDay: Anti-Aliasing Arcangel by Ben Fino-Radin, which describes how this work is experienced in 2015 compared with how is was originally experienced.]

“From Moebius’s art deco sets in ‘Tron’ to William Gibson’s 3D datascapes in ‘Neuromancer’, many artists have imagined what it might look like inside the machine. Cory Arcangel bypasses such stylized, anthropomorphic visions and simply shows us his raw data, 11 hours worth, in all its glitchy 8-bit nakedness. Arcangel tricked Quicktime into reading the binary data daily passing through his computer’s RAM. The result is Data Diaries, a collection of intriguing, abstract data ‘movies’ (complete with audible bleeps and squawks), available in color or black &amp; white. Pass the pixelated popcorn!” 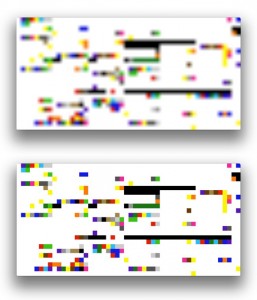 Above-top: Arcangel’s video as it is currently affected by anti-aliasing;
Above-bottom: video rendered at 500px with nearest neighbor interpolation
(Image by Ben Fino-Radin)

Every so often an artist makes a work of art by doing almost nothing. No hours of torturous labor, no deep emotional expression, just a simple discovery and out it pops. What did Cory Arcangel do in this piece? Next to nothing. The computer did the work, and he just gave it a form. His discovery was this: take a huge data file–in this case his computer’s memory file–and fool Quicktime into thinking it’s a video file. Then press play. Your computer’s memory is now video art. Quicktime plays right through, not knowing that the squiggles and shards on the screen are actually the bits and bytes of the computer’s own brain. The data was always right in front of your nose. Now you can watch it.

In college Cory used to slip into the public computer clusters, saddle up to a machine and pull what’s called a “core dump.” In every computer’s memory there are countless pieces of left-over information just sitting there waiting for their turn to vanish as new memory is allocated. The email you just wrote is there, so is that Word file that was on your screen an hour ago. The binary data from Photoshop that you left running in the background is there too. A core dump simply writes all that data into a file and saves it on the hard drive. A born hacker, Cory would sift through this tangle of undifferentiated code, line by line, looking for interesting morsels. Maybe he would find a forgotten love letter here and there, maybe someone’s term paper, or maybe just nothing. But it was always a rewarding hunt. For this piece, Cory has simply taken his hacker mentality one step further and converted the hidden world of computer memory into the time-based medium of video.

Data conversions are part of computer art. This is the crux (and also the crutch) of RSG’s “Carnivore” project. Dictionary words are converted into three dimensional spaces in Marek Walczak and Martin Wattenberg’s “The Apartment.” Mark Napier did pure data conversion with “Feed.” What sets Cory’s RAM videos apart is that they don’t pretend to hinge on the craftiness of the conversion. Conversion is not what they are about. The conversions here are incidental, a trivial detail coming ages before the real fun takes place. And because of this, he eschews the A-to-B instrumentalism of these other conversion-based works.

Lots of artists talk about memory. But for artists working with computers, memory has a very specific technical definition. If ever computers had a subconscious, this is it. Cory describes it as “watching your computer suffocate and yell at the same time.” They look like digital dreams–the pure shapes and tones of real computer memory. Each video documents a new day, and each day the computer offers us a new set of memories.

But the greatest thing about Cory’s net art is that he’s not a net artist. He never was and never will be. If net art was cinema, then Jodi would be Godard–fresh, formalist and punk-rock to the core. Entropy8zuper! would be Tarkovsky–lush, magical and complex. Etoy would be Verhoeven–hyper modern, sexy and a tad fascistic. And this leaves Cory, playing in the rec room with his Pixelvision camcorder–all dirt-style, geekcore, and what we like.

FAQ: The first few minutes of each video is System memory, so that is why every day looks the same for the first minute or so,….cory….