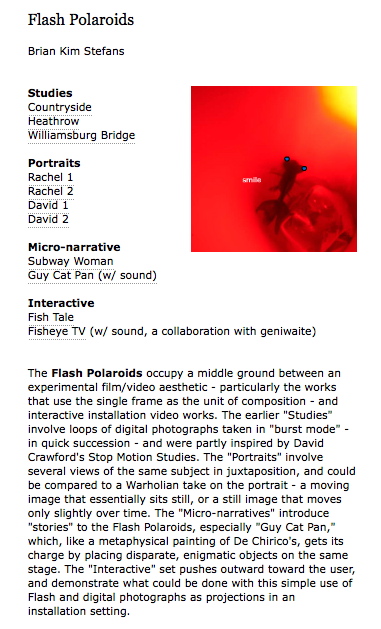 The Flash Polaroids occupy a middle ground between an experimental film/video aesthetic – particularly the works that use the single frame as the unit of composition – and interactive installation video works. The earlier “Studies” involve loops of digital photographs taken in “burst mode” – in quick succession – and were partly inspired by David Crawford’s Stop Motion Studies. The “Portraits” involve several views of the same subject in juxtaposition, and could be compared to a Warholian take on the portrait – a moving image that essentially sits still, or a still image that moves only slightly over time. The “Micro-narratives” introduce “stories” to the Flash Polaroids, especially “Guy Cat Pan,” which, like a metaphysical painting of De Chirico’s, gets its charge by placing disparate, enigmatic objects on the same stage. The “Interactive” set pushes outward toward the user, and demonstrate what could be done with this simple use of Flash and digital photographs as projections in an installation setting.

Most of these Flash works have been preserved with Ruffle by the Electronic Literature Lab in June 2021. When they launch, a play button may appear that you will need to click; after launching, the work may take time to appear.

Three of these Flash works have been emulated with Conifer by the Electronic Literature Lab in June 2021. Click to view the emulations:
Subway Woman
Fish Tale
Fisheye TV