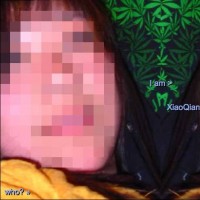 XiaoQian was created by Martine Neddam, an artist who uses language as raw material. Since she began as an artist her favourite subjects always were ‘speech acts’, modes of address, words in the public space. Since 1988 she exposed text objects (banners, plaques, shadows on the wall) in museums and galleries. She also realized many large-scale public commissions in several European countries: Netherlands, France, and Great Britain. Since 1996 she has created virtual characters who lead autonomous artistic existences.