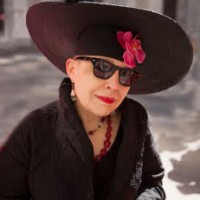 As befits one who took her degree in English literature for fear of having too much sheer fun in the study of music, Baczewska’s solo compositions derive essentially from an a capella sensibility, the voice as orchestra with consonants, pause and juncture, the click of affricatives as primary, if not sole, percussion. In 1974, she was co-founder of Care of the Cow, a cutting-edge performance group which developed quite a following through the early 1980s. During 1981’s Like Feeding Pork to Pigs, Baczewska had a breakthrough: the home of the human voice is the brain.

Ultimately, the expanding voice can be made to take any shape, fill any space, or convey any message. Her focus on the voice and solo performance evolves from this experience. She has concertized extensively and has recently worked on several important collaborations: with video artist Irit Batsry on vocals for video soundtracks; with Fritz Lang, to compose and perform the soundtrack for Lang’s film Woman in the Moon: and, with dancer/choreographer Dennis O’Connor (with whose company she toured the United States and Europe in 1994.) She continues to explore the voice as instrument, sometimes performing with props like a weaving loom, and sometimes incorporating the multitrack capabilities of the recording studio as an added compositional tool.

“In the face of ever-more-access, X (christine) Baczewska has become a self-styled inadvertent recluse! She has not performed in a number of years, but she sings EVERY DAY, and writes and records (electronic sketching at home), as well. X looks forward to jumping onstage again, once she can polish her message to an audience-worthy shine. But she is still not sure, in these unfavorable times, what she has to impart! Never say never.” (2015)