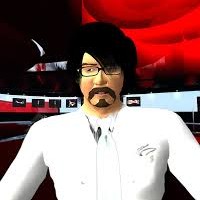 From April 2003 to February 2006, Wagner James Au was a contract writer for Linden Lab, creators of Second Life, primarily hired by the company to cover SL as an embedded journalist in an emerging society, its controversies, its personalities, its innovations and ambitions, along with larger themes of identity, social norms and organization, and cultural expression important to online worlds in general. He has been interviewed by CNN International, NPR’s All Things Considered, the BBC, The Los Angeles Times, Harvard Business Review, News.com, the San Jose Mercury, the Associated Press, Wired Online, Presstime, and the East Bay Express, among other publications. He has spoken on the subject for The Education Arcade (sponsored by MIT), twice at South by Southwest in Austin, and twice at State of Play (sponsored by Yale and New York Law School.)

Apart from New World Notes, he is also a contract consultant and copywriter for SL projects and advertising, and a seasoned game designer, screenwriter, and freelance journalist. Au is a contributor for GigaOM and occasionally for Kotaku. He has also freelanced for Salon and Wired for the past eight-ten years, along with writing for the Los Angeles Times, Lingua Franca, Game Developer, Gamespot, Gameslice, and other publications, primarily on game culture and the game industry, along with politics, film, and pop culture.

Au is also a screenwriter (his script Future Tense was optioned by Canal Plus in 2001), and as a game developer, wrote for Electronics Arts’ groundbreaking conspiracy thriller Majestic and was a designer on America’s Army: Soldiers, an offshoot of the popular America’s Army game.