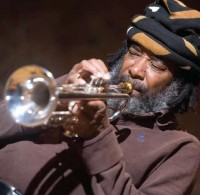 Ishmael Wadada Leo Smith is a trumpet-player, multi-instrumentalist, composer and improviser who has been active in the creative contemporary world music for over thirty years. His theory of Jazz and World music was significant in his music development as an artist and educator. Born in Leland, Mississippi, Smith’s early musical life began in the high school concert and marching bands. At the age of thirteen, he became immersed within the Delta Blues and Improvisation music traditions. He received his formal musical education with his father, the U.S. Military band program (1963), Sherwood School of Music (1967-69), and Wesleyan University (1975-76).