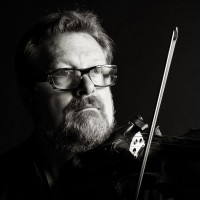 Todd Reynolds, composer, conductor, arranger and violinist, is a longtime member of Bang On A Can, Steve Reich and Musicians and an early member of Yo-Yo Ma’s Silk Road Project. His commitment to genre-bending and technology-driven innovation in music has produced innumerable collaborations with artists that regularly cross musical and disciplinary boundaries, regularly placing him in venues from clubs to concert halls around the world.

Reynolds is a founder of the band known as Ethel, a critically acclaimed amplified string quartet (represented by ICM Artists), with whom he wrote and toured internationally. He has also produced Still Life With Microphone, an ongoing theater piece which incorporates his own written and improvised music, compositions written for him, and elements of video and theatrical arts. Nuove Uova [new eggs], new works for violin and electricity, another Todd Reynolds production is a ‘new-music cabaret’ of sorts, having as its home Joe’s Pub in Manhattan. He is the recipient of ASCAP awards, an American Composers Forum Grant for Still Life with Mic and a 2003 Meet-the-Composer Commissioning Music/USA award.

Reynolds’ current string quartet featuring all-stars from New York’s new music scene is currently on tour with Meredith Monk’s Songs of Ascension and engaged in collaborations with composers and performers such as Kenny Werner, Neil Rolnick and Theo Bleckmann. Current commissions include music for dance, theater and orchestra, as well as a double CD to released on September 28th by the Innova label.