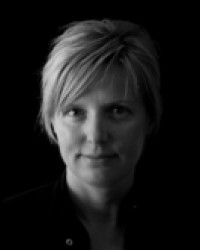 Teri Rueb is an artist whose work engages digital, architectural and traditional media and modes of production. Her most recent project, “Grimpant” (a collaboration with Alan Price) is currently on exhibit at La Panacee in Montpellier, France. “No Places With Names”, a collaboration with Larry Phan and Carmelita Topaha (Dine) is a permanent installation and recent acquisition of the Institute of American Indian Arts and the Museum of Contemporary Native Art in Santa Fe. Her works have received awards including a 2008 Prix Ars Electronica Award of Distinction in the Digital Musics category.

Rueb has pioneered the form of GPS-based interactive installations and is the recipient of numerous grants and commissions from international institutions including the Arnold Arboretum, Edith Russ Site for New Media, The Banff Center for the Arts, the Boston ICA / Vita Brevis Temporary Art Program, Artslink, Turbulence.org, and various State Arts Councils. She has lectured and presented her work worldwide at venues including Ars Electronica, ISEA, SIGGRAPH, Transmediale, The New Museum of Contemporary Art, Kiasma Museum, and IRCAM. She has been nominated for numerous awards including the CalArts Alpert Award, Rockefeller New Media Fellowships, and the Boston ICA Foster Prize.

Rueb completed her doctoral degree at the Harvard University Graduate School of Design in 2011 where her research addressed constructions of landscape and subjectivity in mobile network culture. She is currently an Artist Resident at the metaLab at Harvard where she is developing a new work commissioned by the Arnold Arboretum.