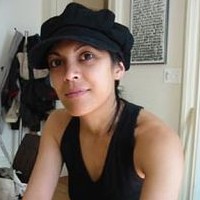 Prema Murthy creates multi-media installations, net-based projects and digital prints to explore cultural and technological hybridity within herself and the world. After receiving a Bachelor’s degree in art history in 1994, she became the assistant to a software engineer and inventor of patented algorithms for digital imaging. Upon learning the technical aspects of creating digital images, she became interested in code and the way it materialized as interface and image. This exploration into new media has led her to create both collaboratively and individually.

Murthy was a core member of the art group, Fakeshop, which has exhibited at the Society for Old and New Media in Amsterdam, the Ars Electronica Festival in Linz, Austria and in the Whitney Biennial 2000 in New York. She has also exhibited individual works at museums and galleries in the US and internationally including the Sandra Gering Gallery-NYC, the Moving Image Gallery-NYC, the List Center for Visual Arts at MIT, Exit Art-NYC, the Alternative Museum-NYC, the Hamilton Gallery-Toronto, Associazione di Cultura-Bologne, and the Generali Foundation-Vienna. Awards include a New York Foundation for the Arts Fellowship in Computer Art and a grant from the Creative Capital Foundation.