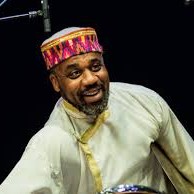 Born in Detroit on January 27, 1955, Pheeroan akLaff grew up listening to recordings by such talents as Thelonious Monk, the Clifford Brown / Max Roach quintet, and the Modern Jazz Quartet. He studied speech and drama at Eastern Michigan University, then spent several months studying and performing with drummers and dancers in Cote D’Ivoire West Africa. Eventually he settled in New York, where his technical facility was finely tuned and his musical taste quickly won him numerous admirers – particularly among the city’s more adventuresome players and composers.

Audiences around the world have marveled firsthand at Pheeroan’s exciting percussion work, thanks to a number of overseas tours – with his own ensembles and those of his peers. His newest works on CD include Global Mantras on the Modern Masters label and Brooklyn Waters, a collaboration with pianist Michael Cain on Telepathy records. Throughout the Eighties and Nineties, Pheeroan has performed and recorded with many of today’s leading musical lights: Geri Allen, Anthony Braxton, Anthony Davis, Andrew Hill, Oliver Lake, David Murray, Leo Smith, Cecil Taylor, Henry Threadgill, Mal Waldron, Yosuke Yamashita and a host of others.