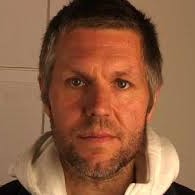 Peter Luining is an Amsterdam based artist, curator and theorist. He studied contemporary philosophy in the mid 80’s. After his study he became active in the Amsterdam vj-scene. He started fiddling with computers, and made 3D animations in commercial jobs. He also directed video- clips. Unsatisfied with commercial jobs and his role of only doing images and video with music made by others he started to combine video with his own music. In 1995 the character of his work changes dramatically when he discovers the net and the relative easy way interactivity could be achieved by using webpages.

After doing some obscure net performances, Luining first got international recognition with his work “clickclub”, which he presented at the Transmediale festival in Berlin. This netpiece distinguished itself from nearly everything at that time because of the way the user could and could not interact with its sounds and images. Since 1997 Luining’s work is turning towards a kind of minimalism, while maintaining his earlier research of the dynamics of the net. An important milestone in his work is BGO MUI*5 (2002), an interactive public artwork for the Dutch Department of Justice.

Inspired by the problems he faced by setting up this large public artwork his work starts to become more conceptual which also means that he starts to theorize and write about the use of computers and it’s basic material computersoftware. Peter Luining’s work has been widely exhibited internationally.