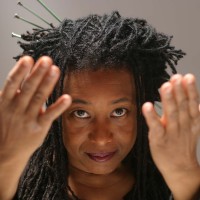 Pamela Z is a San Francisco-based composer/performer and audio artist who works primarily with voice, live electronic processing, and sampling technology. In performance, she creates layered works combining operatic bel canto and experimental extended vocal techniques with a battery of digital delays, found percussion objects, and sampled sounds triggered with a MIDI controller called The BodySynth (which allows her to manipulate sound with physical gestures.) She has done solo performances in the San Francisco Bay Area since 1984 and has toured extensively throughout the United States, Europe, and Japan. She has performed in numerous festivals including the “Bang on a Can” festival at Lincoln Center in New York (1996), the Interlink Festival in Japan (1996), SoundCulture (1996 San Francisco, 1999 Auckland NZ), and Pina Bausch’s 25th Anniversary Festival in Wuppertal, Germany (1998).

Ms. Z has composed, recorded and performed original scores for choreographers and for film and video artists, and has done live and recorded vocal work for other composers (including Charles Amirkhanian, Henry Brant, and Donald Swearingen.) She has created a number of commissioned audio pieces for New American Radio, including “Parts of Speech” a work which also exists as a large-scale, interdisciplinary solo performance complete with multi-image projections and video. Pamela Z has been a recipient of numerous award and fellowships including the CalArts Alpert Award in the Arts and the McKnight Visiting Artist Fellowship. She is currently in Japan for a residency she has been awarded by the NEA and the Japan/U.S. Friendship Commission. She holds a music degree (1978) from the University of Colorado at Boulder.