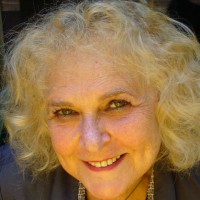 Nina Sobell is a New York-based artist who has produced a broad body of work embracing various themes, strategies, and mediums, including video, performance, installation, sculpture and live TV.  A participant in the feminist performance movement of the 1970s, her conceptually-based work ranges from taboo performances and museum installations to interactive video matrixes for public participation.

Sobell began using video in the ’70s as a way to study spectators’ interactions with her sculptures, which were placed anonymously in public areas. Exploring video-sculpture, Sobell was intrigued with creating psycho-social transformations via video technology, making environments and mobile structures to physically engage the viewer.

Pursuing video’s relation to the subconscious led Sobell to her well-known Brainwave Drawing piece, in which a screen monitor registered the brainwaves of two people and their silent attempt to communicate with each other. Most recently, she has been an AIDS activist, producing the first live viewer-directed AIDS information telecast for TV. She is in the process of creating an interactive AIDS information CD, a virtual brainwave drawing reality, and animating her neo-primitive sculptures via video computer.

“Working with time, perception, exploring cognitive theories as art, led me further into the non-static world of video. At this point, I needed to retreat into an intimate personal dialogue, making sculpture for video camera space only, compressing time and private experience.”