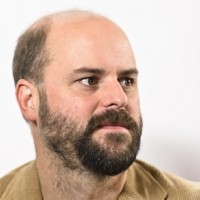 Matt Ingalls is a clarinetist/composer/computer music artist based in oakland, california. he is currently most active with improvised music in various solo, group, and electronic settings- performing with such bay area musicians as morgan guberman, tim perkis, dan plonsey, gino robair, scott rosenberg, john shiurba, andrew voigt, and matt’s own “virtual” improviser: “c.l.a.i.r.e.” he can be heard on apraxia, limited sedition, seamus, superj, tmea, and various self-created labels. he has performed at the seattle improvised music festival, the monterey rock and art festival, and oakland’s east bay creative music festival, in which he is co-organizer. as an active performer of new music, matt has premiered over 50 compositions, many of which are unaccompanied solo pieces dedicated and written specifically for his unique performance style.

matt’s compositions have been performed in the united states and abroad, receiving many awards and recognitions including: 1st finalist in the 1994 bourges electro-acoustic puy (humor) competition; the 1996 ascap/seamus commission and recording prize; new langton art’s “1997 bay area award” for musical performance and composition in the san francisco bay area; and an a. h. miller award for excellence in musical composition (1998). matt holds a bachelor of music from the university of texas at austin and a masters of arts from mills college. he has studied with chris brown, alvin curran, karl korte, george lewis, russell pinkston, and dan welcher he received many scholarships and awards during his education, including an election to the “who’s who among students in american universities & colleges (1996-1997).” most recently, matt has been visiting professor of music at dartmouth college.