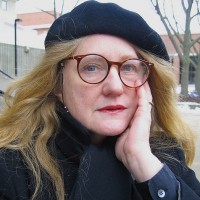 Mary Lucier has worked in many mediums, including sculpture, photography, and performance, but has concentrated primarily on video and installation since 1973, producing over forty-five major pieces in that time that have been shown internationally in museums, galleries, alternative spaces and festivals and are represented in numerous public and private collections.

Her newest videotape entitled Summer, or Grief was recently on view at Lennon, Weinberg, Inc. in New York and is currently included in “Screens and Memes” at Harvestworks, Inc. Lucier is presently at work on a commemorative flood commission for the North Dakota Museum of Art called Floodsongs, which will open in Grand Forks in November, 1998 and travel to the Museum of Modern Art in 1999. Her work since 1971 is the subject of a forthcoming book from Johns Hopkins University Press, to be published in conjunction with Performing Arts Journal.