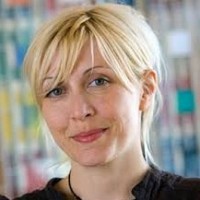 Mary Flanagan is a leading innovator, artist, educator and designer, whose works have included everything from game-inspired art, to commercial games that shift people’s thinking about biases and stereotypes. Her interest in play and culture led to her acclaimed book, Critical Play, with MIT Press (2009). Her fifth academic book, Values at Play in Digital Games, with philosopher Helen Nissenbaum, was just released from MIT.

Flanagan established the internationally recognized game research laboratory Tiltfactor in 2003 to invent “humanist” games and take on social through games. At Tiltfactor, designers create and research catchy games that teach or transform “under the radar” using psychological principles. Flanagan has been an American Council of Learned Societies fellow, a Brown Foundation Fellow, and a MacDowell Colony Fellow. She has served on the White House Office of Science and Technology Policy (OSTP) Academic Consortium on Games for Impact, and her work has been supported by commissions and grants including The British Arts Council, the National Science Foundation, the National Institute of Justice, the National Endowment for the Humanities, Robert Wood Johnson Foundation (with Digital Mill), and the Institute of Museum and Library Services.

Flanagan is known as an engaging and lively public speaker who gives several keynote talks a year and travels for many invited lectures at events such as TEDx; Business Innovation Factory; Games, Learning and Society; IndieCade, Vienna Games Conference; Women in Games; and the Museum of Modern Art in New York. She has given invited talks at MIT, the Game Developer’s Conference, Microsoft Research, USC, NYU, Georgia Tech, University of Toronto, Games for Change, SIGGRAPH, the Smithsonian, and many international venues.

Her innovative scholarship was showcased in 2014 The Atlantic article, “Not Your Father’s STEM Job.” Her lab is regularly featured in game blogs such as Kotaku and Polygon. She is widely known as a pundit of matters related to digital culture, publishing popular scholarship in venues such as USA Today, The Huffington Post, The San Francisco Chronicle, Inside Higher Education, The Daily Beast, and more. Dr. Flanagan is the Sherman Fairchild Distinguished Professor in Digital Humanities at Dartmouth College.