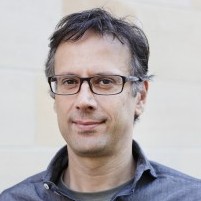 Marco Deseriis is Assistant Professor of Media and Screen Studies. His research is concerned with the social, political, and aesthetic uses of networked media. More specifically, his writings explore the relationship between the affordances of networked media and collective identities, the rise of distributed forms of authorship, social movements media, as well as their political and cultural genealogies. Deseriis’ book Improper Names: Collective Pseudonyms from the Luddites to Anonymous (University of Minnesota Press, Fall 2015) brings together some of these threads by analyzing forms of subjectivity that are neither collective nor individual, but rather trans-individual or “condividual.”

Deseriis’ new research project focuses on the affordances of decision-making software for political purposes and its use by pro-democracy and populist movements and parties. Deseriis’ writings have been published in the Journal of Communication Inquiry, Theory & Event, Radical History Review, Culture Machine, Mute, and Subjectivity.

At Northeastern, professor Deseriis has taught classes such as Media and Democracy, Digital Media Culture, Media and Identity, and Media, Culture and Society.

Dr. Deseriis received his PhD from New York University in 2011.