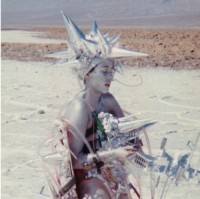 Philip R. “Bulk Foodveyor” Bonner and Benton “Valued Cu$tomer” Bainbridge formed Lord Knows Compost sometime in the late 70’s or early 80’s depending on when you ask them. “Phil and I met when we were 10 years old and immediately started doing projects in all sorts of media together.” Lord Knows Compost did most of their live video shows on the West Coast from 1993 through 1995 though they have released projects which span all the way back to our middle school days! Lord Knows Compost had many guest appearances on stage and in the studio, one additional official member- Voluptate velit esse Molestaie (Wendy Bell) and one honorary member Naval Cassidy (Jonathan Giles).