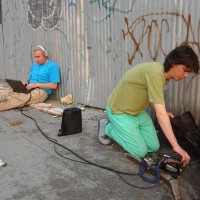 Willy LeMaitre has created time based intermedia works since 1988. Treating video as a live art it has served as a pivot point in collaborations between himself, musicians, writers and other visual artists. Based in Toronto he continues to enjoy a productive dialogue, now in its 10th year, with Montreal composer Eric Rosenzveig.

Eric lived and worked in Europe during the second half of the 1980’s playing improvised music with the trio FAT (recordings on Recommended Records, Megaphone, Rachot Records, etc). He has also produced recordings of ritual and traditional music in the field and studio. His work with Willy has centered on methods of integrating sound and moving image, primarily with the instrument The Very Nervous System, developed by David Rokeby.

Located in different cities their practice has conveniently found it’s way via the net. Most notably with The Appearance Machine, an autonomous system that generates media assets and content streams from the reanimation of consumer refuse and distributes its live results to logged galleries. Prior to this they lived and worked nomadicly (’92-’97) choosing to orient each project around their geographic location.

Their current travail ‘Playlist’, a multi-threaded media work that uses the high speed network as an environment for the production and public display of a collaborative video work created by a number of Canadian and European media artists. They have received numerous grants and awards for their installations including 2nd prize and the Public Choice Award at last year’s LIFE 3.0 competition for artificial life artworks in Madrid and The Telefilm Canada prize at Images Festival of Independent Film, 2000, Toronto, for best film or video at festival.