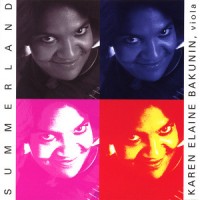 Karen Elaine Bakunin is the First Place Grand Prize winner of the 1988 Bruno Giuranna International Viola Competition. As winner of numerous solo competitions in her native California, she is noted by the Los Angeles Times as “…the soloist to bring the viola out of obscurity.” Bakunin has recorded with the London Symphony Orchestra, the City of London Sinfonia (for which she received nomination for a 1992 Grammy Music Award), the Orquestra Sinfonica da Paraiba, and the Moraska Philharmonie.

As an arranger and soloist, Bakunin’s works for solo viola with string orchestra have been performed by the Rogue Valley Symphony, the Afro-American Chamber Music Society, the Palisades Symphony, the Southbay Chamber Orchestra, the Southeast Symphony, and members of the California Philharmonic Orchestra.