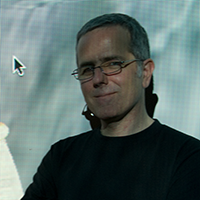 Joseph DeLappe is an artist/activist with a substantial body of work on the subject of geopolitics and drones and is considered a pioneer in the nascent field of computer games and art. Professor of the Department of Art at the University of Nevada where he directs the Digital Media program. Joseph is lead artist on Kill Box UAV; dealing with concept/content development, theoretical and historical research into drone warfare and primary lead on installation, development of publicity materials and archiving surrounding the project.

Working with electronic and new media since 1983, his work in online gaming performance and electromechanical installation have been shown throughout the United States and abroad. In 2006 he began dead-in-iraq, typing consecutively, all names of America’s military casualties from the war in Iraq into the America’s Army first person shooter online recruiting game. DeLappe created and directs the crowdsourced memorial project, iraqimemorial.org.