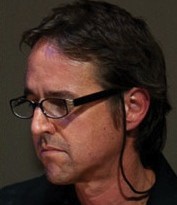 Guitarist John Shiurba is a composer and improviser whose musical pursuits have spanned several primary areas — open improvisation, art-rock, and noise. Since 1986 he has co-led the Bay Area band Eskimo, whose amalgam of funk, jazz and complex post-Beefheart rock has received both critical and popular acclaim. He has also led the monster-metal art rock group Ebola Soup since 1993, and has toured the US and Europe as bassist with the noise/rock/improv trio the Molecules. As an improvising guitarist, Shiurba has developed a unique and personalized approach to the instrument. Through the use of extended techniques and unusual preparations, he expands the traditional sound range of the instrument, producing stunning, often unrecognizable results. He has played with internationally acclaimed musicians such as Eugene Chadbourne, Marc Ribot and Peter Van Bergen, as well as many of the finest West Coast improvisers– Gino Robair, Dan Plonsey, Carla Kihlstedt, Myles Boisen, Tim Perkis, and Matthew Sperry to name a few. In 1998 Shiurba formed the improvised music label Limited Sedition, which has released 9 CDs documenting the diverse and lively Bay Area improvised music scene.