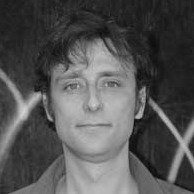 Ca. 1980, Brooklyn-based artist John Klima (b. 1965) attempted to code a 3D maze on a TRS-80 with 4k RAM and failed miserably, but has been obsessed with 3D graphics ever since. Contracting for companies such as Microsoft, Turner Broadcasting, and Dun & Bradstreet from 1993 to 1998, Klima honed his programming skills while continuing to make art within the flexible schedule that free-lance programming provided. In 1998, Klima discontinued activities as a commercial programmer to focus solely on the creation of art software.

Klima mounted his first solo exhibition in February 2001 at Postmasters Gallery and has opened his second solo show at Postmasters in November 2003. His work has been shown at European festivals, such as VIPER (Switzerland) and EMAF (Germany). His work glasbead was included in the “New Media New Face” exhibit at the ICC in Tokyo, Japan (1999) and received the Golden Lasso Award for Art in the Web3DRoundup at SIGGRAPH 2000 in New Orleans. His work ecosystm, commissioned by Zurich Capital Markets, was shown at the Whitney Museum as part of the exhibition BitStreams (2001). Klima’s recent work, EARTH – previewed at the National Library of Medicine on May 21, 2001, and at SIGGRAPH 2001 in Los Angeles – was included in the 2002 Whitney Biennial. In 2002, he received a grant from the Langlois Foundation for his project Terrain Machine.

By drawing upon gaming and the various possibilities of manipulating and transliterating data, John Klima’s work occupies new territory in media art. Although there is an obvious connection between gaming and interactive digital art, and the gaming industry has played an important role in the development of multi-user environments, the parameters of this connection are rarely subjected to serious aesthetic investigation. Employing a variety of technologies to produce both hardware and software, Klima’s work consistantly connects the virtual to the real, addressing issues of remote responsibility, and bluring the distinctions between the simulated and the concrete.