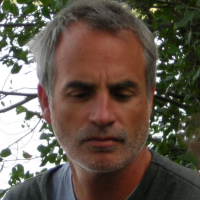 John Cayley is Professor of Literary Arts at Brown University. He is a pioneering practitioner and theorist of digital language arts. He is also a poet, translator and small publisher with a BA in Chinese ‘Language and Civilization.’ In 2001, he was the winner of the Electronic Literature Organization’s award for Poetry. He has published translations from Gu Cheng, Yang Lian, Bing Xin, and others, and assembled a book-length study of the artist Xu Bing. Recent and ongoing digital language arts projects include How It Is in Common Tongues, a part of The Readers Project with Daniel C. Howe (thereadersproject.org), imposition with Giles Perring, riverIsland, and what we will. Cayley works with code, network services, big data, and, more specifically at Brown, writing for immersive virtual reality (‘the Cave’). In 2015 a collection of generate and other poetic texts, Image Generation, was brought out by Veer Books, London.