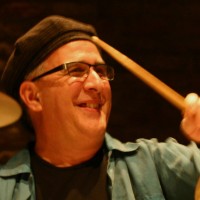 Jim Pugliese grew up listening to and playing soul music and rhythm and blues. He studied percussion with Raymond Des Roches, and performed and recorded new music with John Cage, Philip Glass, Lukas Foss, Kent Nagano, and Carlos Chavez. He spent twelve years as a member of Dean Drummond’s Newband and The Harry Partch Ensemble, studying and performing microtonal music. At the same time he developed an interest in Afro-Cuban music and studied drumming and rhythm with Master Drummer Pablo Landrum.

For the last twelve years, he has been improvising and recording with many of downtown’s most prominent composer/improvisers. He has performed throughout the United States, Europe and Japan, and his music has been performed at Roulette, The Knitting Factory, Lincoln Center Outdoor Festival and other venues in New York City, and at De Ijsbreker, Apollohuis, Logos, and the Recontre Musicale Bu Jeune Federal Festival in Europe. A 1997 Artist In Residence at Harvestworks in NYC, he recently performed with Philip Glass on the PBS TV show Sessions on 54th Street. In February 1997 Avant released the first cd for his collaborative trio EasSide Percussion with Christine Bard and Michael Evans. He is currently working with his band Soultronix.