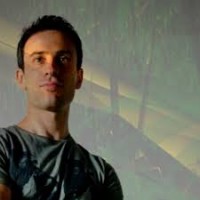 Jesse Gilbert is a composer, multi-instrumentalist, and software engineer who has developed an extensive body of work centering around aspects of improvisation and cross-disciplinary collaboration, with a focus on networks and experimentation with new media. Gilbert’s work ranges widely from explorations of symbolic systems and abstract scores to large scale Internet-based works involving international ensembles to the construction of software-based algorithmic musical agents interacting on the network. He is consistently interested in exploring means of moving beyond the concert hall, engaging listeners in immersive media environments that aim to transform audience members into active participants.

Gilbert is currently exploring the uses of streaming media feedback structures, which has led to several solo pieces and to FLOOD, a large-scale collaboration with visual artist Carole Kim which was shown at the Museum of Contemporary Art in Los Angeles in August 2001.

His collaborative work has been featured as part of AFI’s “The Arts and Streaming Media” in Los Angeles (2001), the net.congestion festival in Amsterdam (2000), Ars Electronica (1998), and the “Recycling the Future” celebration of Kunstradio in Vienna (1998). Gilbert has received commissions from the Jerome Foundation, the Markle Foundation, Creative Capital, and the National Endowment for the Arts, and has twice been a resident at the Banff Centre for the Arts. He has performed widely in the United States and in Europe, and runs a micro-label, Open Ear, due to release several discs in early 2003.