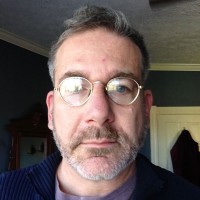 Curt Cloninger is an artist, writer, and Assistant Professor of New Media at the University of North Carolina Asheville. His art undermines language as a system of meaning in order to reveal it as an embodied force in the world. By layering, restructuring, hashing, eroding, exhausting, and (dis)splaying language, he causes language to perform itself until its “meaning” has less to do with what it denotes and more to do with how it behaves.

Curt has been published on a wide range of topics, including new media and internet art, installation and performance art, experimental graphic design, popular music, network culture, and continental philosophy. Recent topics have included glitch art, the “new aesthetic,” electronic voice phenomena, bodily affect, object oriented ontology, process philosophy, and artistic lying. His articles have appeared in Intelligent Agent, Mute, Paste, Tekka, Rhizome Digest, A List Apart, and on ABC World News. He is the author of four books, most recently a collection of his essays spanning 14-years, (aptly) titled One Per Year. He maintains lab404.com, playdamage.org, and deepyoung.org in hopes of facilitating a more lively remote dialogue with the Sundry Contagions of Wonder.