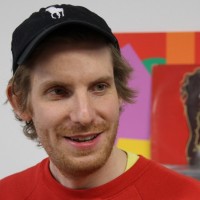 Cory Arcangel is a Brooklyn-based fine artist (b. 1978, Buffalo, NY) who makes work in a wide range of media, including composition, video, modified video games, performance, and the Internet. During the past two years, Arcangel has completed several diverse projects. He worked extensively with a team of computer experts from the Carnegie Mellon Computer Club, in collaboration with The Andy Warhol Museum, The Carnegie Museum, and the Carnegie STUDIO for Creative Inquiry to unearth and preserve Warhol’s lost digital experiments, which he wrote about for the summer edition of Artforum.

Last May, he launched a publishing and merchandise imprint, Arcangel Surfware, whose products include bedsheets, iPad covers, and magazines. In July, he released his debut novel, Working On My Novel, published by Penguin. Recent exhibitions include “This is all so crazy, everybody seems so famous” at Galleria d‘Arte Moderna e Contemporanea, Bergamo (2015); “All The Small Things” at the Reykjavik Art Museum, Reykjavik (2015), “Masters” at the Carnegie Museum of Art, Pittsburgh (2012–13), “Pro Tools” at the Whitney Museum of American Art, New York (2011), “Beat the Champ” at the Barbican, London (2011), and “Here Comes Everybody” at the Hamburger Bahnhof, Berlin (2010–11). Recent performances include “Dances For The Electric Piano” at the Berlin Philharmonie, and “Selected Notes on Creativity” at nyMusikk, Oslo, Norway.

His work is included in many public collections, including the Hammer Museum in Los Angeles, MoMA in New York, the Tate in London, Berlin’s Neue Nationalgalerie, the Smithsonian Museum of American Art in Washington D.C. and the Migros Museum für Gegenwartskunst in Zürich.