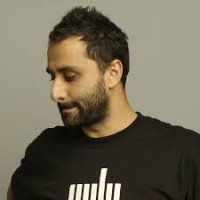 Burak Arikan is an artist and designer creating networked systems that evolve with the interactions of people and machines. He shows the instances of these systems through diverse media including prints, animation, software, electronics, and physical materials. His work has recently been shown at Ars Electronica, Venice Biennale, and Art Interactive in Cambridge. Arikan completed his master’s degree at the MIT Media Laboratory in the Physical Language Workshop (PLW) led by John Maeda.

While at MIT, he pursued research exploring systems that address the transition from connectivity to collectivity in the context of creative expression. Sparked by this research, Arikan initiated the “Open I/O” platform for artists and designers to collaborate through composing distributed electronic objects and space over the Internet. Prior to MIT, he worked as an information architect and visual designer in the United States and Turkey. He received an MA degree in Visual Communication Design from Istanbul Bilgi University in 2004, and a BS degree in Civil Engineering from Yildiz Technical University in 2001.