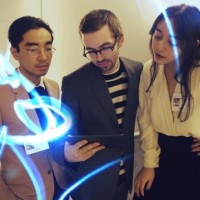 BFFA3AE (Daniel Chew, Micaela Durand, Maximiliano Ferro, Matthew Gaffney) was formed in 2007 as a net art collective. On their shared blog and website, an ongoing dialogue occurs that explores the implications of the Internet on culture and life. A particular focus is placed upon the way in which their generation is being socialized through this medium and its effects on mass culture. Using a syntax that transcends language, their website speaks through the use of a variety of formats available to the technology, including pictures, videos, sound, and code. Acknowledging the reach of the Internet into the physical world, the group has since expanded beyond its initial impulse to include work in a variety of mediums including film and performance. This has allowed them to tackle the same issues and further their conversation by viewing the medium from a different perspective.