August Highland and the Superheroes of Humanity 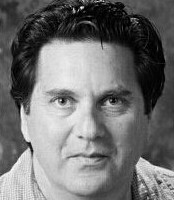 August Highland was born in 1957 in Los Angeles, California. He attended UCLA and the University of California at Berkeley where he studied the Classics and Romance Languages. Highland also studied Hebrew and Aramaic. He earned his Bachelor’s Degree in Western and Buddhist Psychology at the Naropa Institute in Boulder, Colorado. He met his wife, Mary, in 1991 and they were married in 1995. Mary is a Psychotherapist and publishes a print and online directory, which is used as a resource by mental health practitioners for referring clients, and by individuals searching for a suitable therapist for himself/herself.

Today August Highland lives with his family in San Diego, California, where he works as a writer and editor. The literary-visual work of August Highland has been called “Alphanumeric Painting”, “Interpoetry” and “Genre-Splicing”. All compositional elements in his visual work are text, and are derived from his literary work. Highland’s work is being exhibited internationally online and offline. He is represented in Santa Fe, New Mexico by ZINO Contemporary and in Los Angeles, California by Sylvia White. Highland is also the publisher of the MAG which is an international literary journal with co-editors in over 40 countries. Interviewed by Ayran Kaganof in 2012.