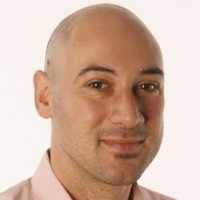 Aram Sinnreich is a multi-instrumentalist, composer, and author from New York City. He has studied a diverse range of musical idioms including jazz, western art music, Ghanaian traditional music and American folk and blues at Wesleyan University and at the Mannes School of Music in New York. Sinnreich plays fretless bass with Brave New Girl, a pop fusion ensemble which he co-founded with Dunia Best, Todd Nocera, and Jesse Gilbert, and has appeared in numerous blues, jazz and theatrical events. He has been involved in Internet-based art and performance since 1996, and has participated in such projects as Plug.In, a conference devoted to the marriage of commercial music and new media, and ParkBench, an Internet-based audiovisual performance collective.