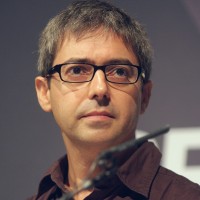 Born 1969. Media critic and editor-in-chief of the magazine Neural since 1993. Awarded “Honorary Mention” for Net.Vision at Prix Ars Electronica 2004. One of the founding contributors of the Nettime community and one of the founders of the organization Mag.Net and of the ‘European Peripheral Magazine’ list. Now he writes for Springerin, Mute, MyTech-Mondadori.com and RTSI (Italian language Switzerland Radiotelevision). In 2001 he joined the n.a.m.e. (normal audio media environment) art group and developed ‘Sonic Genoma’, a computer/sound art installation. In the same year he organized the ‘Liberation Technologies’ conference in Bari. From 2002 he’s a collaborator of the Digitalkraft exhibitions. He also conducts ‘Neural Station’ a weekly radio show on electronic music and digital culture, and daily updates the Neural website. Lives in Bari, Italy.