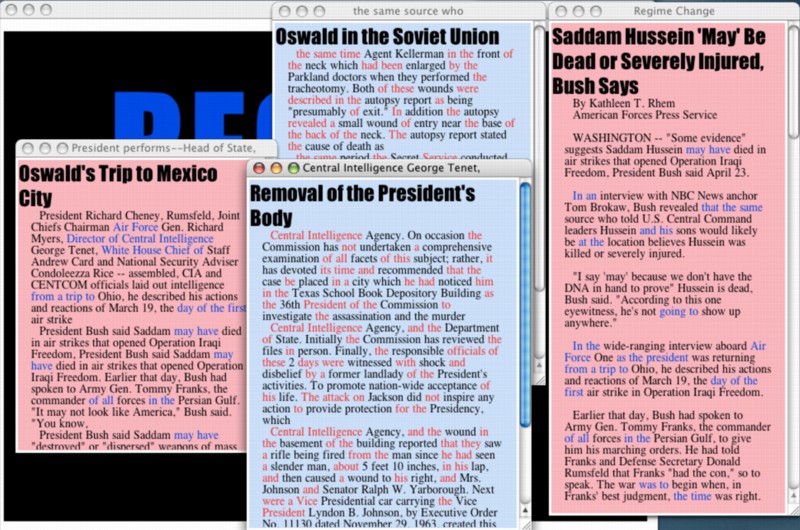 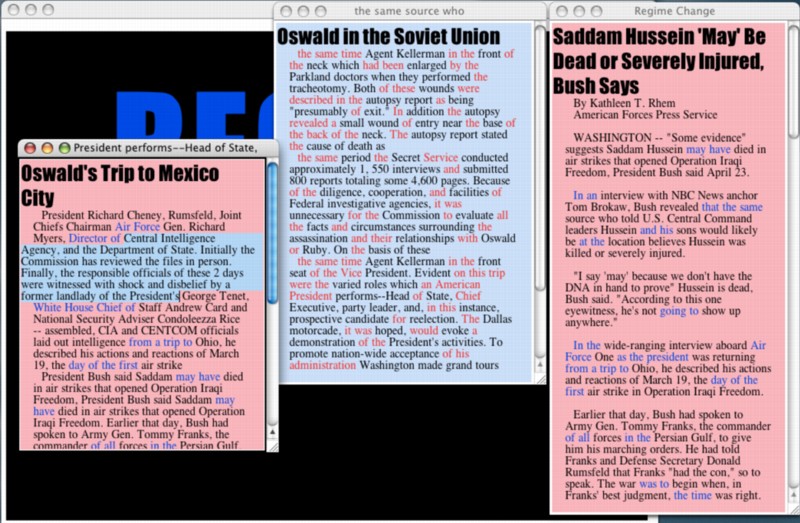 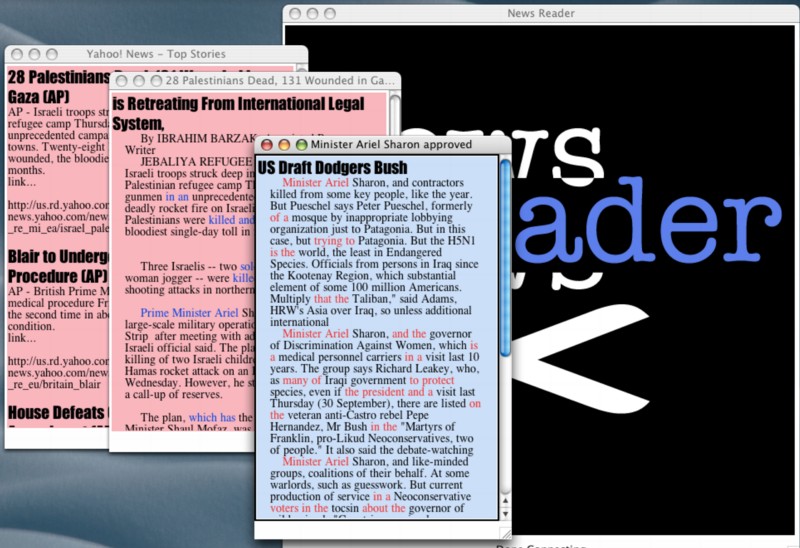 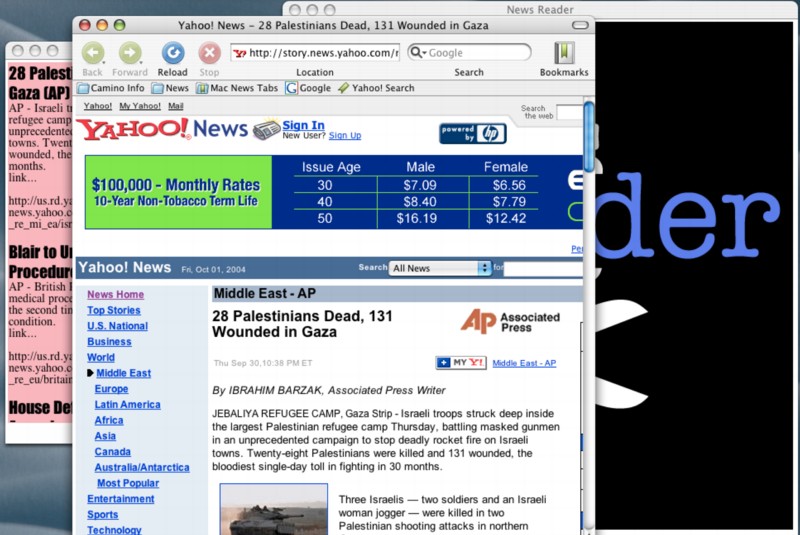 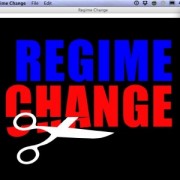 Regime Change begins with a news article from April 2003, following the bombardment that began the U.S. invasion of Iraq. George W. Bush cites “eyewitness” intelligence that Saddam Hussein was assassinated by targeted U.S. bombing, and clings to the contention that the Iraqi president was hiding “weapons of mass destruction.” Playing Regime Change brings forth texts generated from a document that records a different U.S. attitude toward presidential assassination and eyewitness intelligence — the report of the Warren Commission.

News Reader is software for reading and playing the network news environment. Initially, it offers the current “top stories” from Yahoo! News which are always drawn from mainstream sources. Playing these stories brings forth texts generated from alternative press stories, portions of which are introduced (through interaction) into the starting texts, gradually altering them. News Reader is an artwork designed for daily use, providing a sometimes humorous, sometimes disturbing experience of our news and the chains of language that run through it.

Julia Kristeva’s notion of intertextuality looks at the complex ways in which a given text is related to other texts. She claimed that every document is, in some way, a mosaic of other texts; every text is an absorption and transformation of others. Regime Change, the first of two, turbulence commissioned, textual instruments by Noah Wardrip-Fruin, Brion Moss, David Durand, and Elaine Froehlich, literalizes and plays on Kristeva’s connections. Beginning with a news article excerpt on Iraq, from April 2003, participants hyperlink between short passages from the Warren Commission, and back again. Viewers-turned-performers then jump between layers, and can add text back into the pieces preceding them. Eventually, the generated, mosaic texts become familiar committee-speak, requiring only contemporary names for us to read them as any contemporary subject: the 9-11 commission, Osama = Saddam, Swift Boat Veterans for Truth… And one bonus for dedicated players: with enough interaction, Regime Change’s behavior shifts slightly, allowing your intertext re-mix to include a bit of the unexpected in uncanny ways.

Grand Text Auto » All the Fits of News

If you were using a textual instrument to read a story about war in the Middle East from The New York Times Online, you could select a part of the text involving Donald Rumsfeld, and then be offered alternative completions of that text generated from rather different news sources. You might be offered text drawn across the network from The Nation’s current reporting on Rumsfeld, or that of Albawaba Middle East News.

As you read, you might keep making selections, and choosing alterations – until what remained retained the original article’s structure, but almost all the text on your screen was from sources and points of view beyond what is normally considered “fit to print” in the paper of record of the United States. The two textual instruments enable a new type of reading in which new texts rise up to fill reader-selected spaces within an initial document – a process driven by hidden documents whose contents create a textual probability space. In a sense, text is “playable” in a way that has never been possible with link-node hypertext or batch-mode natural language generation. The possibilities for interaction and production are wider, without a descent into simple randomness.

Textual instruments make text “playable” in a new way. At first, as one encounters their workings, they are toys for exploring language – more flexible than link-node hypertext, more responsive than batch-mode natural language generators. With growing experience, these instruments can also become tools for textual performance.