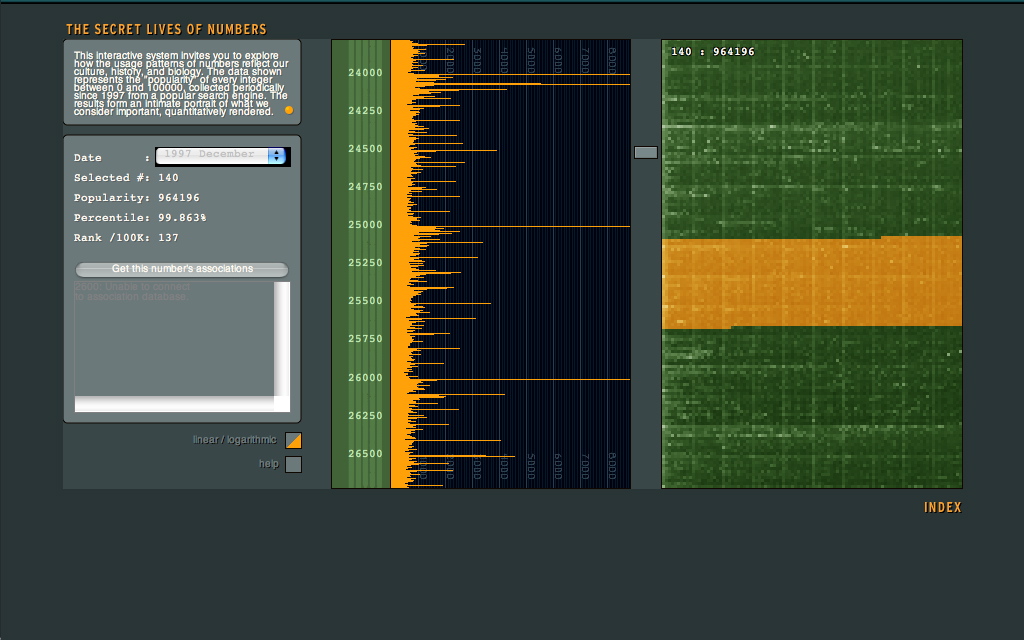 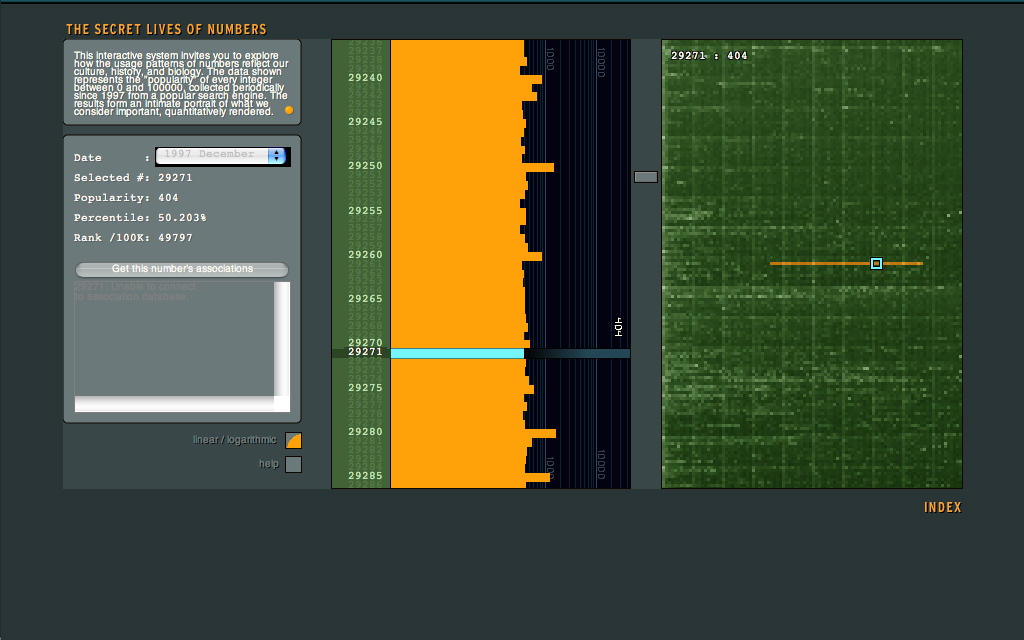 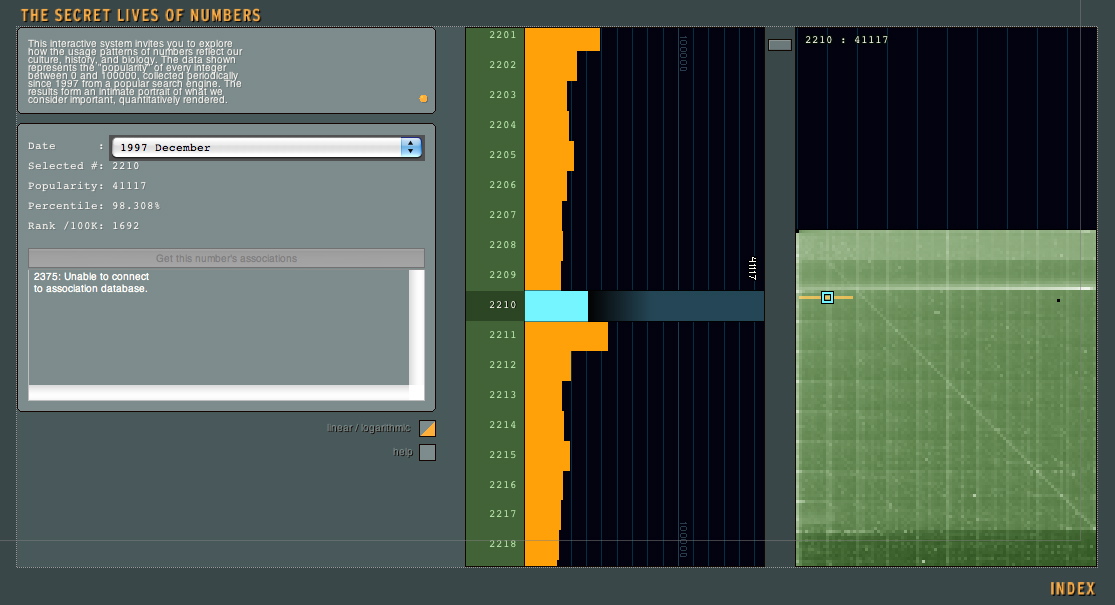 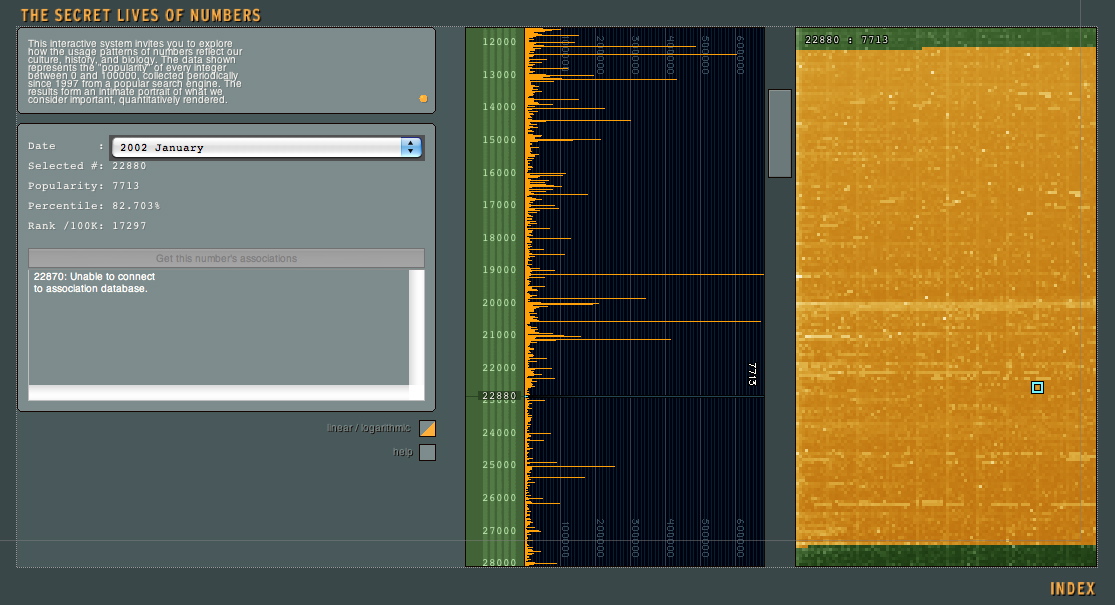 The Secret Lives of Numbers 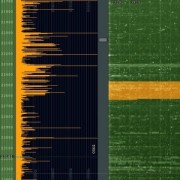 The authors conducted an exhaustive empirical study in order to determine the relative popularity of every integer between 0 and one million. The resulting information exhibits an extraordinary variety of patterns which reflect our culture, our minds, and our bodies. We surmise that our dataset is a numeric snapshot of the collective consciousness; herein we return our analyses to the public in the form of an interactive visualization, whose aim is to provoke awareness of one’s own numeric manifestations.

A slide-show from flickr.com created by Golan Levin

Part of this piece (the search feature) no longer functions. To interact with the visualization, you’ll need Java installed in your browser. These are the original instructions.

How often do you visit Turbulence.org? If not too often, now would be a good time. Recently, the New York new media organization launched “The Secret Life of Numbers” by Golan Levin with assistance from Martin Wattenberg, Jonathan Feinberg, David Becker, David Elashoff and Shelley Wynecoop. Fun for math geeks everywhere, The Secret Life of Numbers is about the popularity of numerals. Using custom software, popular search engines and statistical tools, the artists surveyed the public to understand what integers were the most favored, as if members of a boy band. Rather than just present cold statistics, though, the artists give site visitors an interactive visualization. Who said numbers weren’t cool?

It All Adds Up
Net Art News, Rhizome.org

What is the most popular number on the Net? Surely ’69’ is making the rounds, and we’d all like to see a little less of ‘404’ (the number associated with ‘File Not Found’ errors)? Contributing to the growing pool of data-visualization oriented work are artists Golan Levin, Jonathan Feinberg, Martin Wattenberg, and Shelly Wynecoop. Their project, The Secret Lives of Numbers, is the beautiful result of an exhaustive study to determine the relative popularity of every integer between zero and one million, on the web. Log on to contemplate the various social patterns of numeric codification. Or just check out how your lucky number stacks up.

The Secret Lives of Numbers | Report

The Secret Lives of Numbers | Golan Levin and Collaborators

The Secret Life of Numbers | trivia

For example, certain numbers, such as 212, 486, 911, 1040, 1492, 1776, 68040, or 90210, occur more frequently than their neighbors because they are used to denominate the phone numbers, tax forms, computer chips, famous dates, or television programs that figure prominently in our culture. Regular periodicities in the data, located at multiples and powers of ten, mirror our cognitive preference for round numbers in our biologically-driven base-10 numbering system. Certain numbers, such as 12345 or 8888, appear to be more popular simply because they are easier to remember.

Humanity’s fascination with numbers is ancient and complex. Our present relationship with numbers reveals both a highly developed tool and a highly developed user, working together to measure, create, and predict both ourselves and the world around us. But like every symbiotic couple, the tool we would like to believe is separate from us (and thus objective) is actually an intricate reflection of our thoughts, interests, and capabilities. One intriguing result of this symbiosis is that the numeric system we use to describe patterns, is actually used in a patterned fashion to describe.