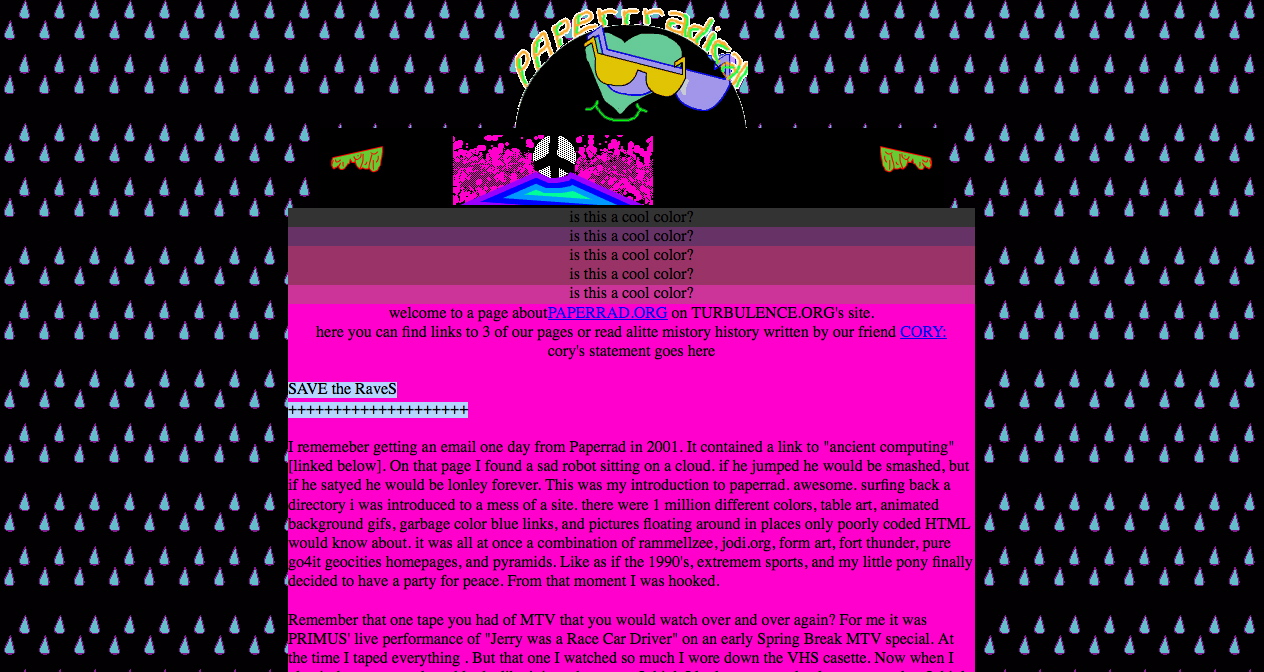 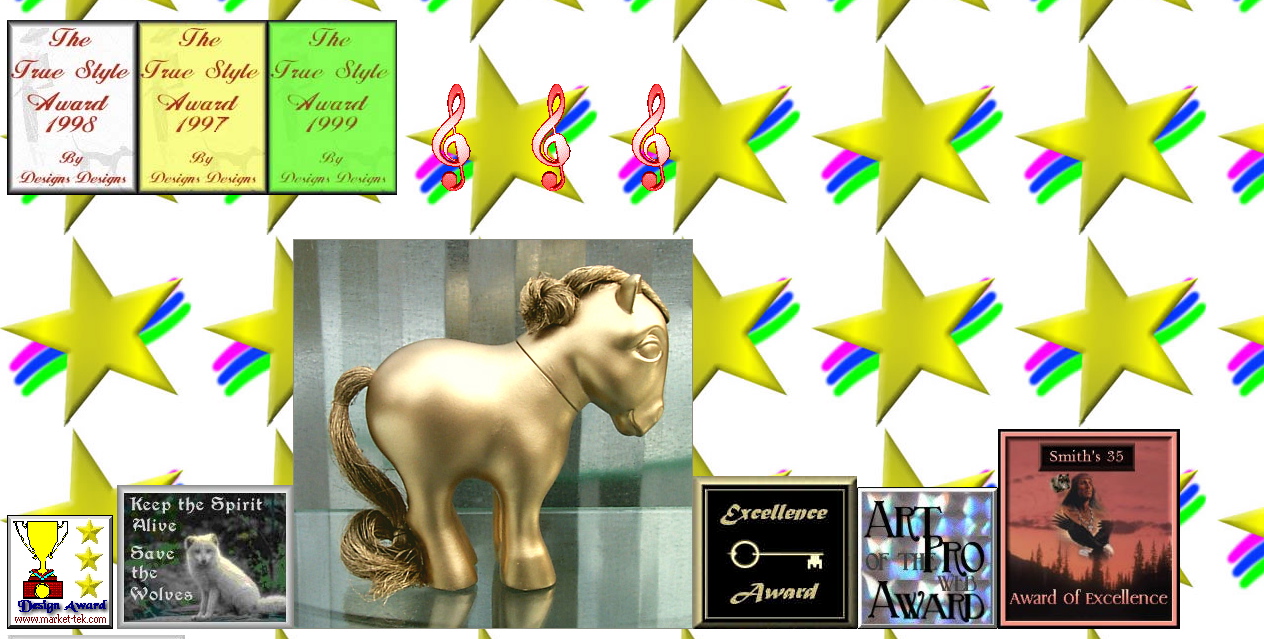 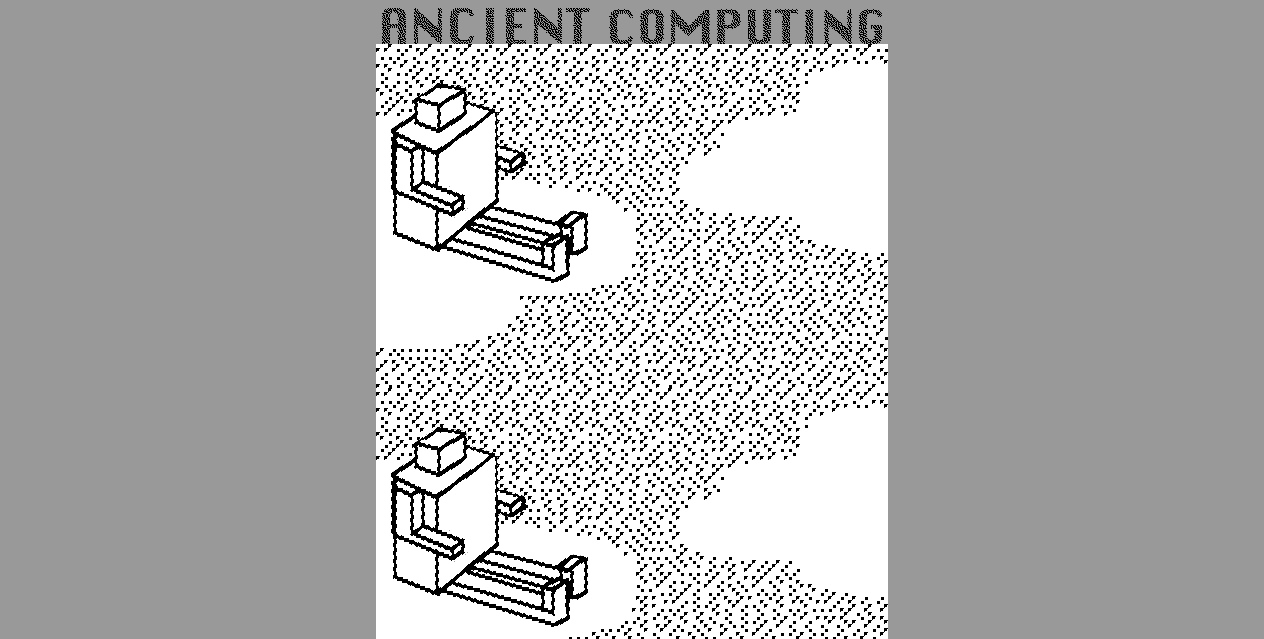 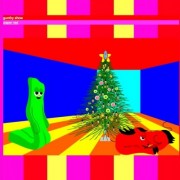 Since 2001 Paperrad has worked non-stop on creating a massive catalogue of self-published comics and cd-rs, video cartoons, tv pilots, hand-painted t-shirts, and stuffed dolls. Their website, paperrad.org, celebrates the power of self-publishing over the internet, merging design and content into one free fantasy Mega-Mall for your spirit. Included in this Spotlight are three works: “Gumby: Xmaz World View cartoon,” “ancient computing comic,” and “awards page.”

At once affirmative and critical, the videos of artist collective Paper Rad synthesize popular material from television, video games, and advertising, reprogramming these references with an exuberantly neo-primitivist digital aesthetic. As member Jacob Ciocci writes, “In the ’70s and ’80s cartoons and consumer electronics were bigger and trashier than ever and freaked kids out… Now these kids are getting older and are freaking everybody else out by using this same throw-away trash.”

The manic and varied output of Paper Rad–the art collective of Jessica Ciocci, her brother Jacob, and their friend Ben Jones–now includes a book, and it’s more than a hard copy of the group’s content-rich, arcade-like, bad html ‘web mall.’ The book, ‘B.J. and da Dogs,’ is published by art and comics press PictureBox, and is a collection of kaleidoscopic doodling, stoner poetry, two graphic novellas, found and staged photos, and installation documentation of large-scale painted cardboard dioramas. Adult insights, near-past nostalgia, and obsessive pop culture tangents mesh with teen aesthetics (i.e. punk and skate zines of the ’80s & ’90s, early video games, neoprint booths and drawing software) amid multiple paper stocks and, as the team boasts, ‘almost every fluorescent Pantone ink.’ Here fancy production is the perfect foil to Paper Rad’s makeshift aesthetic and cavalier use of both obsolete and of-the-moment technologies. But remarkably, the collective’s pop treasure/ detritus sensibility, while astute, is only compassionately satirical, and hardly ironic at all. Mainly it’s really funny and looks great.

Paper Rad has performed and exhibited at Foxy Productions, Brooklyn, NY; the Museum of Contemporary Art, Chicago; the New York Underground Film Festival; the Boston Underground Film Festival; the Big Orbit Sound Lab, Buffalo, NY; Space 1026, Philadelphia, PA; Tate Britain, and the Contemporary Museum, Honolulu, among other venues. They have self-published many collaborative, hand-drawn books including Howard the Duck (2003), Wish U Were Here (2002), Paper Rad#12 (2001), and Pony Tail of Tears (2001). They have also produced several records including 3ROTFLOL: rolling on the floor laughing out loud (Autumn Records, 2003) and The Danger is On/Role the Dice (Papasiageek Records, 2002).

I rememeber getting an email one day from Paperrad in 2001. It contained a link to “ancient computing”. On that page I found a sad robot sitting on a cloud. if he jumped he would be smashed, but if he satyed he would be lonley forever. This was my introduction to paperrad. awesome. surfing back a directory i was introduced to a mess of a site. there were 1 million different colors, table art, animated background gifs, garbage color blue links, and pictures floating around in places only poorly coded HTML would know about. it was all at once a combination of rammellzee, jodi.org, form art, fort thunder, pure go4it geocities homepages, and pyramids. Like as if the 1990’s, extremem sports, and my little pony finally decided to have a party for peace. From that moment I was hooked.

Remember that one tape you had of MTV that you would watch over and over again? For me it was PRIMUS’ live performance of “Jerry was a Race Car Driver” on an early Spring Break MTV special. At the time I taped everything . But that one I watched so much I wore down the VHS casette. Now when I play it the tape sounds and looks like it is under water. I think I look at paperrad at least once a day. I think Paperrad is my new Primus.