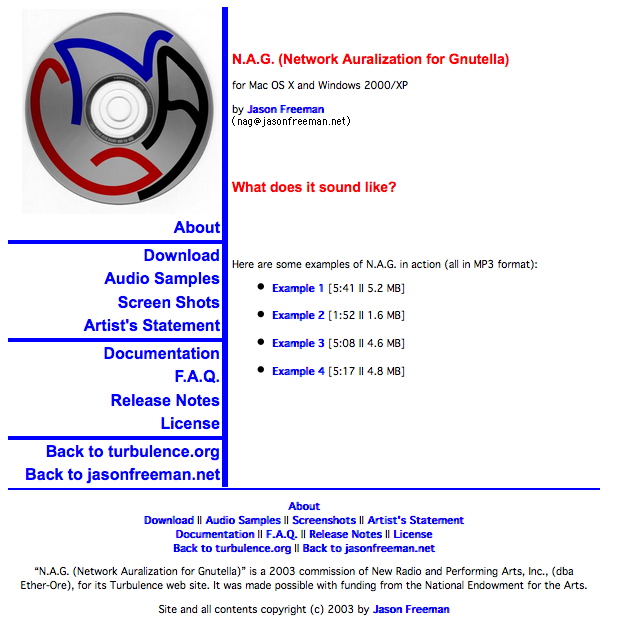 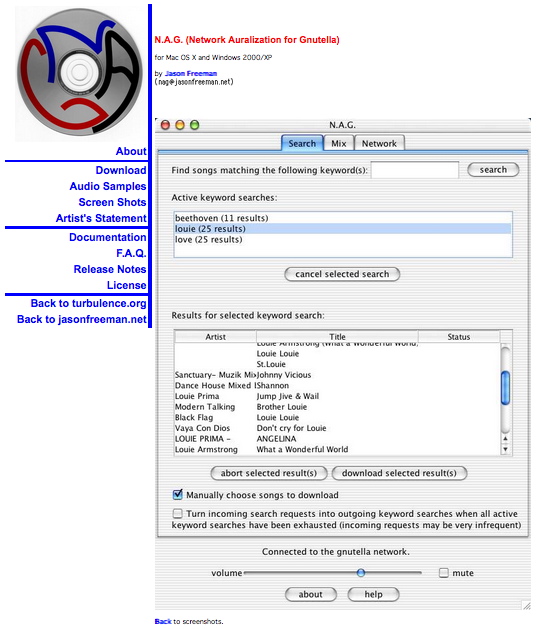 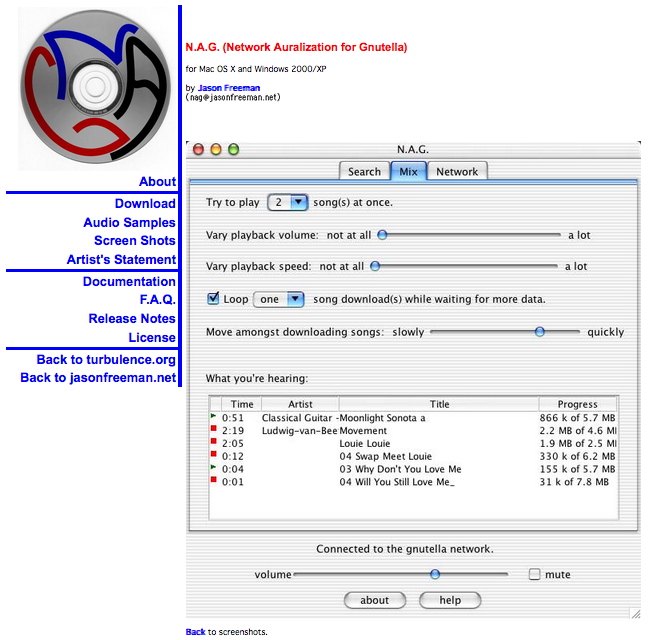 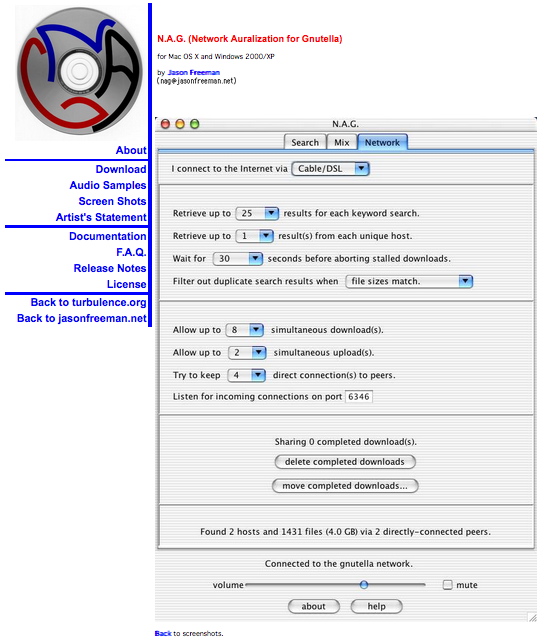 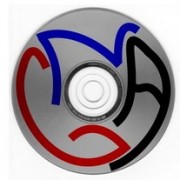 N.A.G. (Network Auralization for Gnutella) was interactive software art for Mac OS X and Windows 2000/XP that turned the process of searching for and downloading MP3 files into a chaotic musical collage. Gnutella was one of the many peer-to-peer file-sharing protocols that emerged in the wake of Napster. Unlike Napster, there was no central server and no single company in control.

It can be difficult to locate and download specific music (2003): searches can take a long time to return results, and downloads sometimes grind to a halt before they can finish. It was exactly these shortcomings that led Freeman to develop N.A.G.

Essentially, N.A.G. was a simple instrument with which users could “play” the Gnutella network. N.A.G. continuously checked the status of all downloading songs and used their respective download speeds to prioritize song segments for real-time playback while they downloaded. Users could control many different aspects of the algorithm, such as how many songs may play simultaneously, how quickly N.A.G. moved amongst songs, and whether N.A.G. varied playback speed and volume in proportion to the download speeds of each song.

How to Make a Sonic Purée From Pop Snippets | Matthew Mirapaul | nytimes.com

Gnutella is one of the many peer-to-peer file-sharing protocols which emerged in the wake of Napster. Unlike Napster, there is no central server and no single company in control. Because Gnutella is completely decentralized, it is legally and technologically challenging to shut down. But it can also be difficult to locate and download specific music; searches can take a long time to return results, and downloads sometimes grind to a halt before they can finish.

These shortcomings of Gnutella are exactly what fascinates me most about the network. Even when I cannot find music I am searching for, the search process itself is interesting; the network constantly surprises me with what it finds. And even if files do not download quickly, completely, and reliably, I find the download process itself captivating; the wildly varying download speeds reflect the chaotic nature of the network itself. In many ways, using Gnutella reminds me of the early days of the World Wide Web, before the big media companies and retailers took over. The process of searching, of serendipitous discovery, can be as engaging as the content itself.

N.A.G. (Network Auralization for Gnutella) turns the process of searching for and downloading MP3 files into a chaotic musical collage. The software continuously checks the status of all downloading songs and uses their respective download speeds to prioritize song segments for real-time playback while they download. Users can control many different aspects of the algorithm, such as how many songs may play simultaneously, how quickly N.A.G. moves amongst songs, and whether N.A.G. varies playback speed and volume in proportion to the download speeds of each song. Essentially, N.A.G. becomes a simple instrument with which users can “play” the Gnutella network.

Consider the following example. A user searches for “Louie,” and N.A.G. quickly begins to download several matching results simultaneously: a few different covers of “Louie Louie,” a tune by Little Louie Vega, and a techno remix of Louis Armstrong. Depending on the state of the network and user settings, N.A.G. may play all of these at once. Or it may play one at a time, switching from one song to another several times each second. Or it may play only short bursts of music separated by long silences. Or it may play songs at speeds which vary from 20% to 500% of normal playback speed. As songs finish downloading or stall, new “Louie” downloads take their place.

I have ambivalent feelings towards Gnutella and other peer-to-peer file sharing networks. As a musician myself, I continue to believe that it is wrong to use these networks to swap copyrighted music with strangers, especially when legal alternatives are available. But more than anything, using these networks to merely swap music is boring! The Gnutella network includes a significant percentage of all music ever recorded, all of it digitized and available at a moment’s notice. It enables new types of interactions not possible in any previous medium; the possibilities for creative applications are nearly endless. N.A.G. is an example of one such possibility.

But N.A.G. is still indebted to music created with older technologies. In John Cage’s Imaginary Landscape No. 4 (1951), twenty-four performers manipulate the controls of twelve radios. Cage’s chance compositional process is augmented by the unpredictability of which frequencies will have broadcasts and what those stations will be broadcasting. His Imaginary Landscape No. 5 (1952) describes an electroacoustic piece to be created from forty-two phonograph records. Again, Cage’s chance compositional process is augmented by the choice of specific records, which is left open. And Alvin Lucier’s Music for Solo Performer (1965) “auralizes” the performer’s brainwaves. The brainwaves are amplified via an array of speakers which are strategically placed on or near various percussion instruments; sound from the speakers causes the instruments to sympathetically vibrate.

N.A.G. is the fourth in a series of works of mine which use technology to facilitate interactive musical experiences. In The Locust Tree In Flower (2000), a multimedia kiosk installation, users read phonemes from a William Carlos Williams poem as they hear their voice processed, looped, and layered to create a short musical work. In Telephone Etude #1: Shakespeare Cuisinart (2001), users call a toll-free number, say their favorite Shakespeare quote, and then listen as their voice is turned into a short piece of musique concrete. And in MetaMix (2002), downloadable software art, users import a source audio track, tweak a few settings, and then listen as the original work is remixed and reordered according to fractal integer sequences. In all of these works, I am interested in breaking down the traditional divisions between composer, performer, and listener. By asking “users” to become part of the creative process itself, I hope to create the kind of engaging and accessible musical experiences which are unfortunately rare in our world today.

I hope that you enjoy exploring and experiencing the Gnutella network via N.A.G.