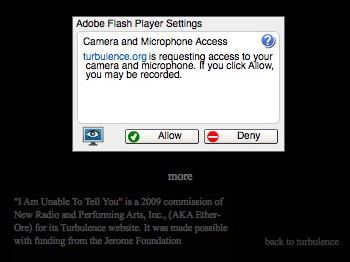 I am unable to tell you
by Ben Dean

I am unable to tell you 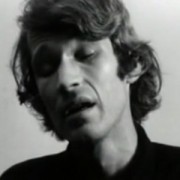 “I am unable to tell you is an experiment in collective solipsism. It’s about leaving your fingerprints on the glass you were trying to clean. It’s only someone else’s experience. It’s about the closure property of sets. It’s just the referents. It’s depth-first search. It’s about being face to face. It’s about not talking. It’s turtles all the way down.”

The real-time feed is no longer accessible.

Jo-Anne Green relayed the comment to Ben Dean via email. This is his response, dated June 17, 2010:

“Well, that is certainly the source of the image, though “embarassing” [sic] does not seem to follow… The decision not to highlight the provenance of the images was an artistic choice… I am unable to tell you”, as the title suggests, is in part a response to the work of Mr. Ader. In fact, it contains the very work you mention as it’s seed. A visitor with persistence or luck would discover this directly. Another clue is given if a visitor does not meet the technical requirements to participate in the piece, and is instead directed to view another work by Mr. Ader, Fall 2.

The artist had hoped it would be clear that he was not plagiarizing, or attempting to shine in the reflected glory of the great artist, but rather to engage with his predecessors, and share that engagement with the audience/co-creators. He felt that the genealogy had just the right amount of clarity to foster a direct experience of the piece, without pushing the viewer/creator into the realm of art history or mere pedantry. I could go on.

When Richard Prince displayed photographs of Marlboro ads he did not credit the original photographer. This piece also contains source code and binaries developed by dozens of other programmers, all uncredited within the (publicly viewable portions of the) work. Perhaps I am being naive, but I get the sense that this comment is driven more by a desire to show off erudition, rather than to engage with the question of authorship or credit.”

Later, Ben wrote “(I am unable to tell you is) the conceptual art version of chatRoullette” …