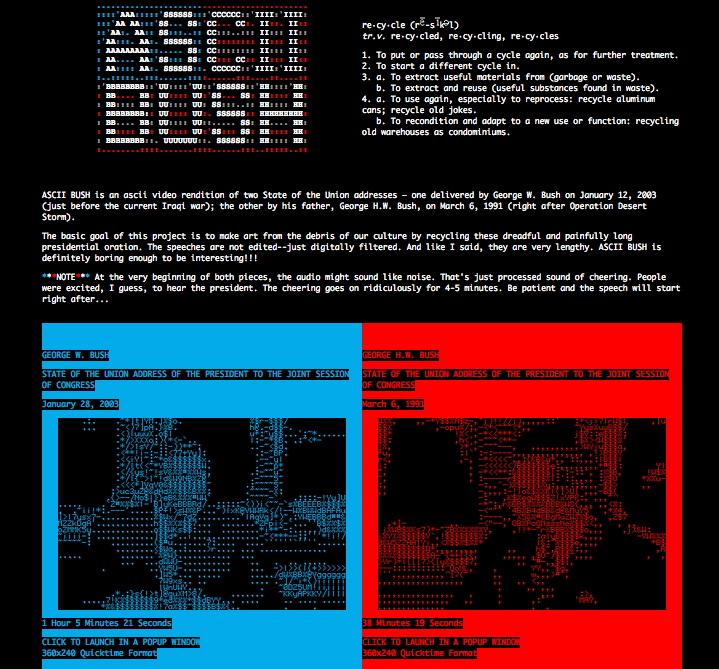 ASCII BUSH is an ascii (American Standard Code for Information Interchange) video rendition of two State of the Union addresses — one delivered by George W. Bush on January 12, 2003 (just before the Iraq war); the other by his father, George H.W. Bush, on March 6, 1991 (right after Operation Desert Storm). The goal of the project is to find some artistic meaning in the dreadful and painfully long US presidents’ speeches, and to investigate the idea of recycling and making art out of the debris of our culture. The speeches are not edited; they are just digitally filtered and also very long. ASCII BUSH is definitely boring enough to be interesting!!!

ASCII, like fire, purifies. At least that’s what New York artist Yoshi Sodeoka of group C505 hopes. Watching this latest project, ASCII BUSH, currently spotlighted at turbulence.org, one can see the similarities between the element and the protocol governing character interchange: alphanumerics twist through footage of two State of the Union addresses like tongues of flames. Sodeoka has filtered video from two generations of Bush presidents, offering online two lengthy addresses (January 12, 2003, by the incumbent George W. Bush; and March 6, 1991, by his father George H.W. Bush) rendered entirely in ASCII characters. The audio evokes a synthetic ambience, while numbers and letters pulse and converge, stitching together these presidential talking heads. According to the project notes, Sodeoka aspires ‘…to make art from the debris of our culture by recycling these dreadful and painfully long presidential oration(s)’. Quite possibly, these ASCII movies are closer to the true state of the union than the propaganda offered in the source materials.