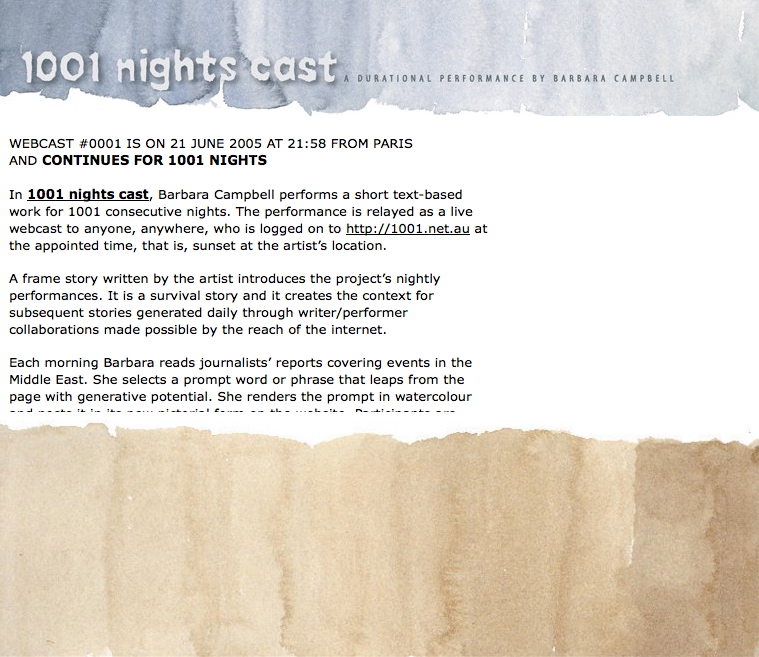 In 1001 nights cast, Barbara Campbell performs a short text-based work for 1001 consecutive nights. The performance is relayed as a live webcast to anyone, anywhere, who is logged on to http://1001.net.au at the appointed time, that is, sunset at the artist’s location.

A frame story written by the artist introduces the project’s nightly performances. It is a survival story and it creates the context for subsequent stories generated daily through writer/performer collaborations made possible by the reach of the internet.

Each morning Barbara reads journalists’ reports covering events in the Middle East. She selects a prompt word or phrase that leaps from the page with generative potential. She renders the prompt in watercolour and posts it in its new pictorial form on the website. Participants are then invited to write a story using that day’s prompt in a submission of up to 1001 words. The writing deadline expires three hours before that night’s performance.

1001 nights cast is a project generated by the forces of that great compendium of Arabian tales, The 1001 Nights also known as The Arabian Nights. The project explores the theatrics of the voiced story, the need for framing devices, the strategies for survival, the allure of the Middle East and its contrasting realities.