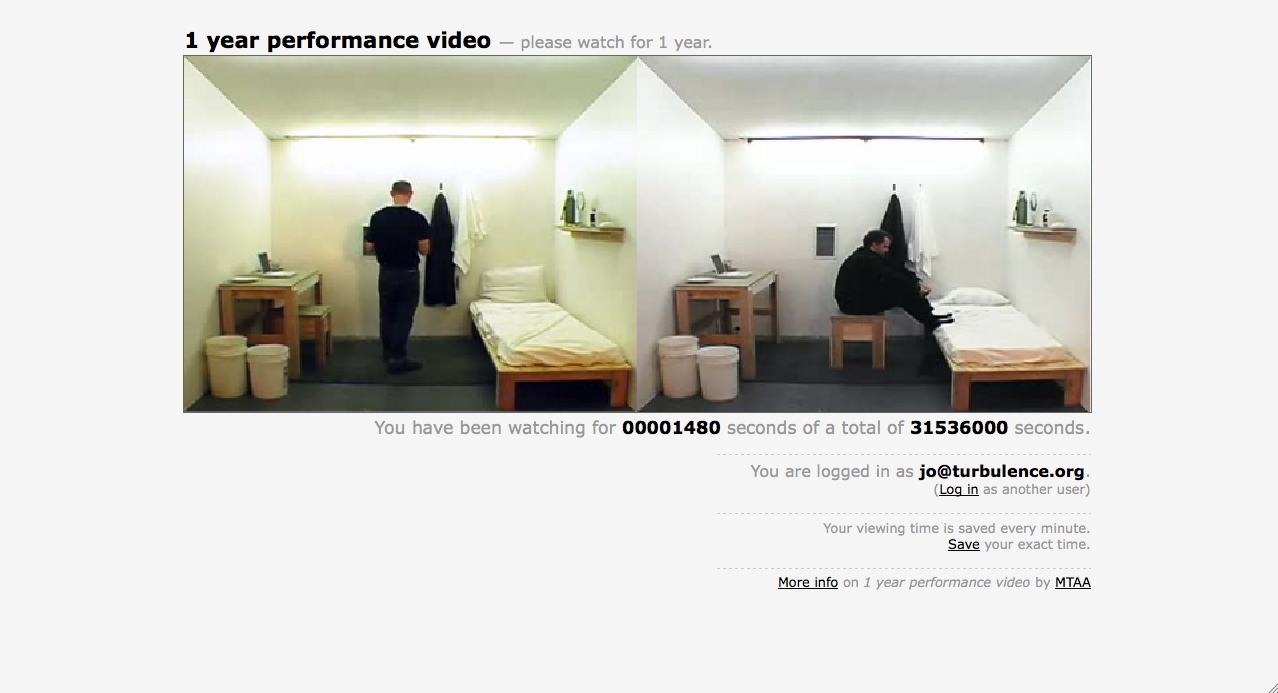 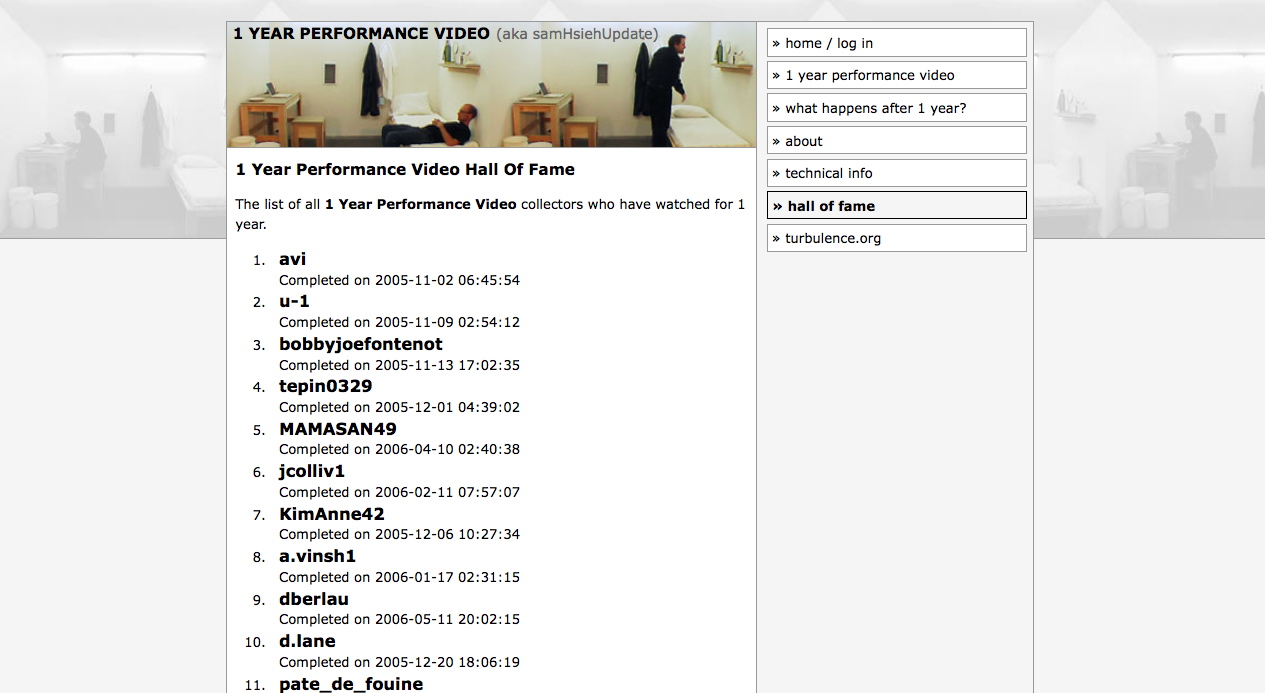 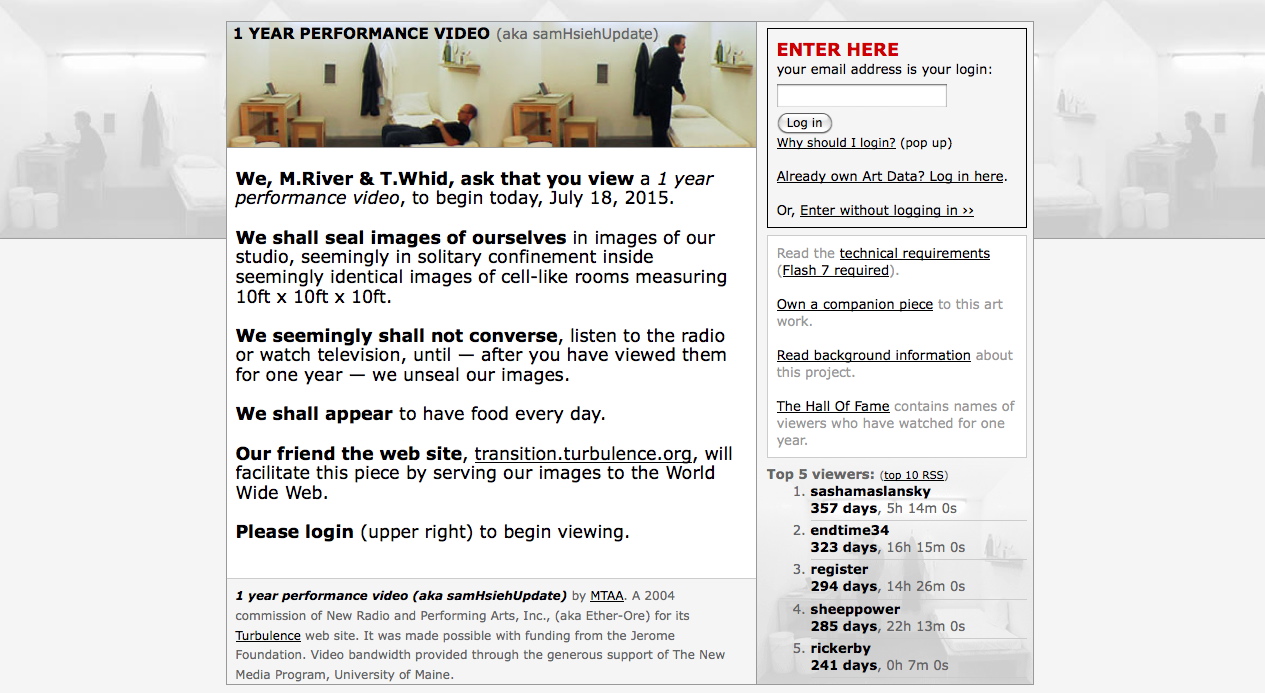 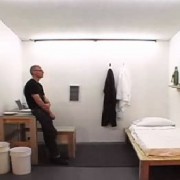 We shall seal images of ourselves in images of our studio, seemingly in solitary confinement inside seemingly identical images of cell-like rooms measuring 10ft x 10ft x 10ft. We seemingly shall not converse, listen to the radio or watch television, until – after you have viewed them for one year – we unseal our images.” “1 year performance video” continues MTAA’s series of Updates “that resound seminal performance art from the 60s and 70s, in part by replacing human processes with computer processes.

Flash and Java. Sound on.

Visitors to the web-based project 1 Year Performance Video are invited to log in and view Mark Rivers and T. Whid living out 365 days within the confines of identical, sparsely furnished, white rooms. The latest in their series of ‘Updates’ on seminal performance art from the 60’s and 70’s, this piece follows from Sam Hsieh’s notorious ‘One Year Performance 1978-79’ in which the artist isolated himself in a cage-like room for a year’s time. In MTAA’s version, the test of endurance is shifted onto the viewer as the artists have replaced the human labor involved in the original performance with 160 pre-taped clips that run continuously — and according to the clock — for the course of a year. If the viewer successfully finishes the piece, they can redeem their time by gaining ownership of the two XML files of the artists, i.e. becoming the collector of a unique set of art data. Consider exchanging your downtime for higher status by dropping in on MTAA. And on your way, perhaps lend some support to turbulence.org who consistently perform real labor to make provocative projects like this one possible.

[… ] 1 Year Performance Video (samHsieHupdate) … demands that the users acknowledge the work of art by completing it themselves, by actually putting in the time while watching pre-recorded files, the strain of the performance is on the viewer now, not the artist; but this strain is a virtual one, one that is no longer concerned with the body but with the dematerialization of such into a new type of action — a meta-action — in art making, and art viewing. In a way, this not only updates the passive demand that a work of art has always had on the viewer: that it be completed by the viewer’s gaze, but it also makes obvious the interactive demand of any art object since minimal art emerged.