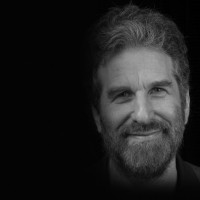 Warren Lehrer is a multi-disciplinary artist, writer, designer, performer, and educator. Over the past 25 years, he has been writing and designing books and theatrical works that explore the music of thought and speech, the complexity of character, the pathos and absurdity of life, and the relationship between social structures and the individual. The form and structure of his books attempt to capture the shape of thought and reunite the oral and pictorial traditions of storytelling with the printed page. Warren has published ten books including “Crossing the BLVD”: strangers, neighbors, aliens in a new America (written with Judith Sloan). With Dennis Bernstein, he wrote the play Social Security: the basic training of Eugene Solomon, and with Harvey Goldman, he co-wrote and co-composed a contemporary opera, The Search for It and Other Pronouns. He has also produced two audio CDs, and six radio documentaries for Public Radio. His plays and performance pieces have been performed at La MaMa Experimental Theatre, the Public Theatre, the Theatre Workshop (Scotland), the Knitting Factory, the Jewish Museum, Independent Art at Here, the Painted Bride, etc.