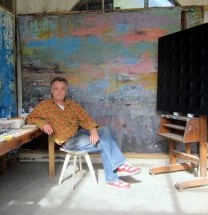 Vlasta Volcano Mikic, a native Yugoslavian immigrated to the United States in 1985 to pursue his art career. As a graduate of University in Belgrade, Mikic inspired by American Minimalism and Russian Constructivism exhibited his paintings in Dusseldorf, Munich, Vienna, Turine and Belgrade. Upon arriving to the New York City, Mikic worked on public projects in Alphabet City, Thompkins Square Park in addition to exhibiting mobile screen paintings.

The digital medium became prominent in his work as he investigated performance and installation. “The transformation of visual images as monumental forms via video projection and time based arts” he claims became his inspiration in the direction of internet-based art.

Since the early 90’s Mikic has been a recognized contributor in the pioneering of telecommunications art performance in New York City. In 1994 Mikic co-founded Floating Point Unity(FPU), a digital performance ensemble basing their work on the philosophy of Antonin Artaud and body and technology. Their work involves a combination of live broadcast, teleconferencing, architectural environments both physical and virtual. Currently, Mikic is working on a project for Location one in collaboration with Tokyo Butoh dancers and lecturing on Internets art.